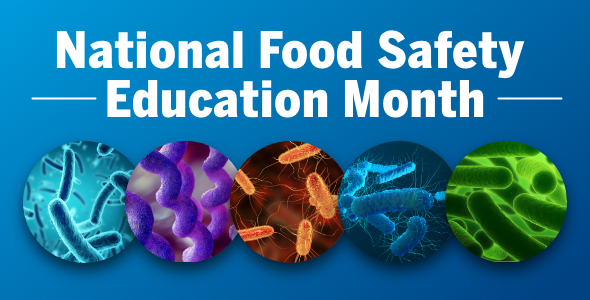 September is National Food Safety Education Month, which aims to raise awareness of the prevalence of foodborne illnesses and how to prevent them. Foodborne illnesses, commonly referred to as “food poisoning”, occur when people consume foods or beverages that are contaminated with pathogens, chemicals, or toxins. There are around 48 million cases of foodborne illness each year.

To recognize Food Safety Education Month, we’ve compiled a quick list of five pathogens that can be culprits behind foodborne illness.

L. monocytogenes bacteria cause the infection listeriosis. L. monocytogenes are not the most common bacteria that cause foodborne illness, but they do have the highest mortality rate—around 15%—and are more dangerous for pregnant women and their babies, people who are immunocompromised, and the elderly. L. monocytogenes thrives at low temperatures and common sources of outbreak are cold deli meats, cold hot dogs, soft cheeses, and unpasteurized milk.

Salmonella bacteria cause the infection Salmonellosis. Salmonella bacteria live in the intestinal tracts of animals and can be transmitted to humans when food gets cross-contaminated with animal feces. There are approximately 40,000 cases of Salmonellosis reported each year in the United States. Food of animal origin, such as poultry, pork, beef, and dairy products, are more commonly contaminated with Salmonella, but all foods have the potential to harbor the bacteria. Carrots, lettuce, and spices have all been hit with recalls due to Salmonella this year.

E. coli O157:H7, often shortened to just O157, is a type of Shiga toxin-producing Escherichia coli (STEC). E. coli comprise a large, diverse group of bacteria, and not all strains cause illness. STEC bacteria, however, cause disease by producing the Shiga toxin, which can cause severe damage to the lining of the intestine and other organs. O157 live in the intestines of cattle, and contamination can occur during the slaughtering process. The bacteria can be passed to humans by consuming contaminated food such as raw or undercooked meat, unpasteurized milk products, and untreated water.

Campylobacter bacteria are a leading cause of diarrheal illness worldwide, and there are around 1.3 million cases of Campylobacter infection each year in the United States. Campylobacter bacteria can survive in a wide range of environments, and infection is associated with the consumption of unpasteurized milk, undercooked meat—particularly poultry, and contaminated water. 90% of cases occur during summer, which is believed to be correlated with undercooked meat at barbeques and other social gatherings.

Cronobacter is found naturally in the environment and tends to thrive in dry foods such as powdered infant formula, powdered milk, herbal teas, and starches. Cronobacter can cause illness in people of all ages, but an infection in infants can be very serious, even fatal. In newborns, an infection caused by Cronobacter usually occurs in the first days or weeks of life and can lead to meningitis or sepsis.

Protect Yourself from Foodborne Illness

When it comes to food safety, we truly are better together. Food processors and manufactures conduct pathogen testing at every step of food production to support sanitation and food safety. On top of protecting consumers and preventing foodborne illness, companies want to avoid recalls, which can be disastrous from both human health and business perspectives.

Once food reaches a consumer’s hands, there are four simple food safety steps the CDC recommends for fighting pathogens and foodborne illness:

When food processors use powerful diagnostics to identify pathogens and when consumers follow easy food handling measures in the kitchen, we all contribute to keeping food safe and preventing foodborne illness.