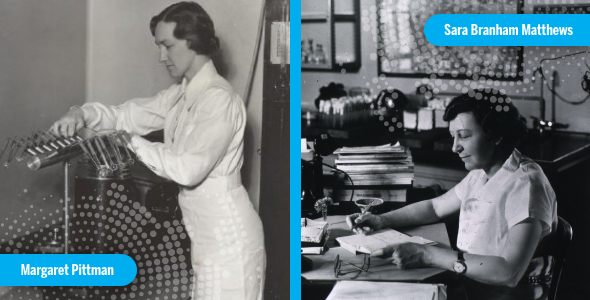 bioMérieux Connection recognizes the importance of Women’s Equality Day and takes this opportunity to highlight two women in science whose work made a lasting impact on public health and who continue to be an inspiring force for all future scientists.

A “Grand Lady” of Microbiology and Infectious Disease Research

Sara Branham Matthews (1888-1962) attended Wesleyan College in Macon, Georgia following in the footsteps of her grandmother and mother. Branham was fortunate to grow up in a family that strongly believed in the value of higher education for women, and she earned her biology degree in 1907.

After a decade of teaching science in public girls’ schools, Branham enrolled at the University of Colorado and began taking courses to fulfill her ever-growing interest in medical research. The demand for labor during World War I provided opportunities women typically did not have in the medical field, and after six weeks of studying bacteriology at the university, Branham was offered a job to teach the subject. She graciously accepted the position, not knowing it would ultimately alter the path of her career. “When the war was over, I was too deep in bacteriology to ever get out again,” she said.

Branham eventually transferred to a position at the University of Chicago, where she earned her Ph.D. and M.D. and taught many up-and-coming female scientists. At age 40, Branham was offered a position as a Senior Bacteriologist at the National Institutes of Health (NIH), primarily to study meningococcus in light of a recent U.S. outbreak at the time.

Branham had many remarkable achievements throughout her 25-year career at the NIH, the most notable being her discovery and isolation of a virus that causes spinal meningitis. Her work led to a successful treatment for the previously incurable disease, and later treatments continued to be derived from her discovery.

Sara Branham Matthews’ research and contributions in the field of infectious disease also include contributing to research and discoveries on influenza, Salmonella, Shigella, and diphtheria toxins. Her impressive track record eventually led to her becoming the Chief of Bacterial Toxins of the Division of Biological Standards at the NIH, a position she proudly held until her retirement in 1958.

An Innovator in Vaccine Development at the National Institutes of Health

Margaret Pittman (1901-1995) first gained scientific experience assisting her father at his country medical practice in rural Arkansas throughout her adolescence. She, along with her siblings, attended Hendrix College; however, because opportunities for women in science were limited at the time, Pittman began her career in education. After saving up money from years of teaching, Pittman was able to attend the University of Chicago, where she was taught by Sara Branham Matthews, who would eventually become her colleague at the National Institutes of Health (NIH).

Pittman earned her Master’s and Ph.D. in bacteriology from the University of Chicago in 1929. After completing her degrees, she went on to hold positions at the Rockefeller Institute in New York and the New York State Department of Health, where she studied the bacteria Hemophilus influenzae. Her research on this topic, which identified six strains of the bacteria, eventually aided others in the development of an effective vaccine.

In 1936, she accepted a position at the NIH, where she worked closely with Branham to develop a meningococcal antiserum and isolated the influenza strain that causes most cases of childhood meningitis. Pittman also contributed to the identification of the cause of epidemic conjunctivitis and research that led to a Salmonella vaccine being developed.

During World War II, Pittman’s focus shifted to the study of blood transfusions, specifically the adverse effects that occurred after patients received blood. Her research and findings during the war forever shifted the standards for blood transfusions.

Pittman also made history at the NIH as the first women to hold the position of Laboratory Chief, where she led the Laboratory of Bacterial Products, Division of Biologics and Standards for 14 years from 1957 to 1971. After her official retirement in 1971, Pittman continued working as a guest at the NIH until 1993.

A Lasting Legacy in Infectious Disease Research and Medicine

The contributions and work of Sara Branham Matthews and Margaret Pittman continue to shape the modern-day medical world. From the identification of bacterial strains to the development of vaccines, these microbiological accomplishments altered the public health sector and changed the way we treat important infectious diseases.

Unknown Photographer, Scanned by the National Institutes of Health (NIH) from the Science Service Collection at the National Museum of American History with permission, Public domain, via Wikimedia Commons