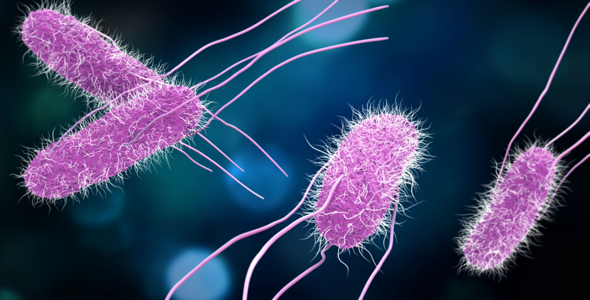 Salmonella is classified as nontyphoidal or typhoidal based on the type of infection it causes. Salmonella typhi and paratyphi cause enteric fever, a condition that is associated with fever and abdominal pain. Non-typhoidal Salmonella causes gastroenteritis, which is typically known as the stomach flu. Salmonella Typhimurium sequence type (ST)313, has recently been found to be the most common Salmonella enterica pathovariant associated with invasive nontyphoidal Salmonella disease. (Pathovariant classification can help provide an indication of differences in the level of risk these pathogens pose to human health.)

A recent study published in Nature defined evolutionary dynamics of Salmonella Typhimurium sequence type (ST)313. To do so, researchers analyzed a large collection of historical and contemporary S. Typhimurium bloodstream isolates. The main dataset consisted of 608 human bloodstream isolates collected between 1996 and 2018 from the Malawi–Liverpool–Wellcome Trust Clinical Research Programme in Blantyre, Malawi. In total, 65% of isolates had a multi-drug resistant genotype and 94% were resistant to at least one antimicrobial. Whole genome sequencing was used to gather the bulk of the data.

One of the main findings of the study was a new variant, ST313 L3, which emerged in Malawi in 2006 and appears to be closely related to ST313 variants from the United Kingdom and Brazil that cause gastrointestinal disease. ST313 L3 was found to be a pan-susceptible linage, meaning it can be treated by a range of antimicrobials.

The Nature study, “provides a snapshot of the large repertoire of genomic changes that shaped the emergence of successful ST313 lineages,” the authors write. This information is valuable because it allows us to determine how invasive certain lineages may be and line up evolutionary changes with real world events. For example, the study suggests that the emergence of ST313 L3 in Malawi in 2006 could be because of the, “phased removal of chloramphenicol from clinical practice following local policy changes in Malawi between 2002 and 2005.” This type of information is important for mitigating antimicrobial resistance because it can help us better understand how pathogens may evolve in response to changes in antimicrobial use.

Many pathogens, such as Mycobacterium tuberculosis and Streptococcus pneumoniae, have evolved into multidrug-resistant (MDR) forms specifically because of antibiotic use. Understanding how Salmonella has evolved over the years and across different countries and continents contributes to our knowledge of the global dynamics of antimicrobial resistance. This is one of reasons why the information gathered during the Nature study is not only relevant to instances of Salmonella BSI throughout Africa, but other parts of the world too.

Additionally, diagnostic technologies, such as whole genome sequencing used in this study, are critical for gathering information and conducting research that can inform and drive antimicrobial stewardship worldwide. The ability to study bloodstream isolates and quickly analyze large amounts of data allows us to improve public health by arming us with the information we need to understand microbial evolution, spot trends, appropriately treat patients, and prevent the transmission of disease.