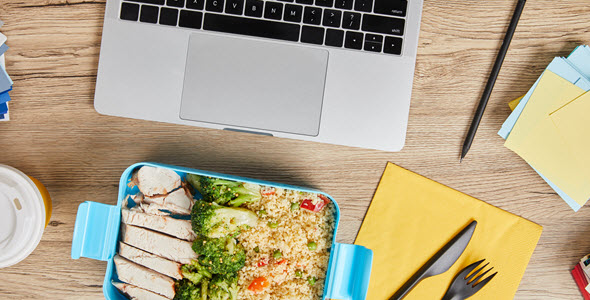 This year’s annual IAFP meeting looked a little different, as attendees logged on from computers around the world to connect with their peers and learn about innovations in their industry. It’s impossible to see and do everything at an event as large as IAFP, so we rounded up the highlights of the three-day event for anyone who may have missed them.

1. Food safety technology is marching towards predicting and preventing problems, rather than simply reacting after they’ve occurred.

There are an almost infinite number of dynamic factors involved in food production: employees, microorganisms, timing, packaging, cleanliness, air quality, and even the weather on a given day can all contribute to a potential contamination issue. At IAFP, many food safety professionals discussed the use of data to predict how these components may interact within a facility, presenting an opportunity for companies to potentially foresee problems and keep them from happening.

“Where do we stand today? It’s what I would like to categorize as a prediction business”, said Dr. Vik Dutta during bioMérieux’s annual IAFP symposium, citing Apple Watch health apps as an example of predictive technology that is used every day. “Food safety is one aspect of it, and you can look around, and it’s happening all around us.” When it comes to food safety, the overarching goal of innovation is to prevent foodborne illness, protecting consumers and saving companies from the consequences associated with an outbreak.

These conversations about data directly align with the future of the regulatory environment and the FDA’s current initiatives, which leads to our second main takeaway.

2. Regulatory bodies have their eye on the future, adapting new approaches to food safety in response to a food system that is becoming increasingly digitized.

On the second morning of IAFP, Frank Yiannas, Deputy Commissioner for Food Policy and Response at the FDA and Mindy Brashears, Under Secretary for the USDA’s Office for Food Safety, provided a regulatory update. The pair touched on the enormous opportunities to use cutting edge science, technology, and data to ensure food safety and security for consumers.

Since July, the FDA has focused on introducing the New Era of Smarter Food Safety Blueprint, an initiative that aims to modernize food safety approaches over the next decade. In an FDA statement, Commissioner of Food and Drugs Stephen M. Hahn said, “One of our most important resources we have today lies in our ability to unleash the power of data.”

Yiannas doubled down on this narrative at IAFP, touching on the FDA’s plans to attain better quality data, conduct more meaningful analyses, and transform these analyses into meaningful, strategic, and prevention-oriented actions. With all the talk about revolutionizing the food safety industry, our third takeaway addresses that some things need to remain constant.

3. Scientific content continues to be a major draw at IAFP, emphasizing the importance of research and science as the basis for all food safety innovation.

IAFP ensured that their virtual event included opportunities for food safety professionals from around the world to showcase research from the past year. Attendees will be able to access this year’s line-up of symposia, roundtables, technical presentations, and posters up to six months after the conclusion of the meeting, a testament to lasting benefits of a virtual program.

Nearly 200 posters were presented over three days from professionals and students. “It is important for the scientific community to come together to share ideas, research, and advancements,” says former IAFP president Stan Bailey on the importance of scientific content in a constantly evolving food safety system. “At IAFP the best and brightest minds from around the world share their data in the name of food protection and innovation.”

The hope is that next year’s IAFP will be in person, but as these highlights show, this year’s event was valuable and impactful. Explore IAFP’s website to stay up-to-date and be sure to look back at anything you may have missed while it’s still available!