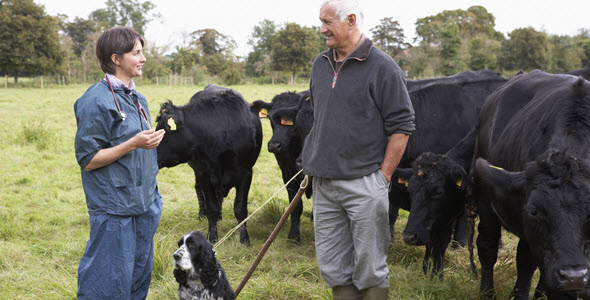 Salmonella species are of interest because they affect both humans and animals, so the development of antibiotic resistance has the potential for broad negative impacts. Of all Salmonella enterica subspecies, S. Typhimurium is the most commonly-isolated serotype from human clinical cases in the United States—in 2016, it was responsible for just over 4,500 human infections across the country. S. Typhimurium is also frequently isolated from animals such as livestock, rodents, and birds. Numerous lineages of S. Typhimurium have been identified and a number of these lineages are often associated with distinct antimicrobial resistance profiles.

A study published in Nature in early September of this year detailed efforts to classify strains of S. Typhimurium that were isolated from 1999 to 2016 from either human clinical or bovine-associated sources in New York State. The goal of the researchers was to use WGS to better understand the resistance acquisition of Salmonella enterica serotype Typhimurium (S. Typhimurium) over time, which was not well understood.

Researchers studied 87 S. Typhimurium isolates from New York State and found that the isolates were largely represented by four major lineages. Two of the lineages were largely antimicrobial-susceptible, while the other two lineages were largely multidrug-resistant. The researchers observed numerous AMR acquisition events, the majority of which occurred late in the twentieth century and into the twenty-first century. This timeline is consistent with the onset of antimicrobial use in livestock—antimicrobials have been used to treat and prevent infections in livestock since their discovery, but were also used as growth promoters from the 1950s up until a few years ago in the United States. The more a specific antibiotic is used, the more likely it is that resistance will emerge and be maintained.

The Nature study concluded that AMR gene acquisition events can occur widely in a pathogen group and that antibiotic consumption has played a significant role in the propagation of antimicrobial resistant bacteria. Specifically, starting in the mid-1980s, the use of the antimicrobial Ceftiofur to treat conditions like respiratory disease in livestock contributed to resistance against the other cephalosporins, most notably Ceftriaxone, which is used to treat invasive salmonellosis in humans when fluoroquinolones cannot be used.

Ceftriaxone resistance can be especially dangerous for children under five, who are most likely to be infected with Salmonella compared to any other age group. Resistance to ceftriaxone greatly limits effective treatment options for our youngest, most vulnerable population, because Fluoroquinolones, which are one of few effective alternatives available for treating nontyphoid Salmonella infections, are not generally recommended for children.

Antimicrobial Resistance in Livestock is a Global Problem

Diagnostic tools such as WGS have been instrumental in revealing the temporal and spatial evolution of resistance in Salmonella and other pathogens, providing data that has informed countermeasures to help combat resistance. Antimicrobial resistance is an evolutionary process that is often predictable, according to the authors of an article published in Science. They say that this predictability could allow the opportunity to initiate intelligence-driven mitigation strategies and that, “we are now at a pivotal point, and what happens next is likely to dictate the future of infectious disease control.”