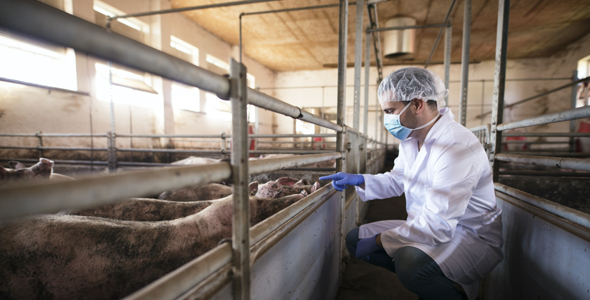 According to National Geographic, “The risk of zoonotic diseases—infections transmitted from animals to humans—is increasing as we muscle in on the wild. The more we raze habitat for farmland and cities, hunt and trade wildlife, vacation in remote forests, and hike through once-inaccessible caves, the greater the chances of “spillover,” as scientists call it when a virus vaults from a species it doesn’t harm into one it does, such as ours.” COVID-19 is the most recent in a long line of zoonotic diseases, particularly zoonotic viruses, to wreak havoc on humans.

Some of the most devastating infectious diseases in human history—Bubonic Plague, certain strains of influenza including H1N1, rabies, Ebola, and HIV/AIDS, to name a few—originated in animal populations.  Many other infectious diseases, such as malaria, dengue fever, Zika virus, and Lyme disease are carried by insect populations. Scientific research has provided significant advancements in diagnostics, prevention, and treatment for many of these illnesses—for example, Bubonic Plague can be treated with antibiotics, many strains of influenza can be prevented through vaccination and treated with antivirals, and rabies can be prevented with vaccination. However, in other cases, we haven’t made as much progress—malaria, dengue fever, and HIV/AIDS together kill over a million people worldwide each year.  And when Ebola strikes, its fatality rate can range from 25% to 90%, depending on the virus strain and other circumstances.

The authors of a 2019 paper published in Current Opinion in Virology say that, “It is generally accepted that approximately 75% of emerging infectious diseases for humans are zoonoses. The rate of emergence of novel viruses appears to be increasing as a result of both increased spillover from their natural reservoirs and our improved ability in detection.”  Past pandemics and the current pandemic illustrate this point and demonstrate exactly why it is critical to research, identify, and catalog zoonotic viruses so that we can guard against and mitigate the effects of future outbreaks.

How Are Viruses Transmitted from Animals to People?

While it is difficult to predict when viral spillover will happen or exactly which viruses are most likely to mutate and become infectious to humans, we have a good understanding of how those viruses can spread to people. Viral spread from animals to people can occur via close contact, a bite, contact with an animal’s body fluids such as blood, or consumption of infected meat or other animal products. For a person to become infected, a virus must possess attributes that allow it to interact with and replicate in our bodies. Not all viruses have the right attributes, which is why they can’t infect humans.

However, viruses can evolve to acquire those attributes. Every virus has genetic material that codes for the attributes it displays. Genetic material can undergo changes, called mutations, in a few different ways. Many mutations don’t have any effect on how the virus functions, but given time, mutations can occur that create significant changes in a virus. In addition to mutations, viruses can also quickly acquire new genetic material through a process called recombination. Recombination can occur when two related viruses infect the same cell simultaneously and exchange their genetic material. The ability to understand and track the evolution of viruses (as well as other types of microbes) is critical for developing disease diagnostic, prevention, and treatment methods.

How Can We Prevent or Mitigate Future Viral Pandemics?

Identifying, cataloging, and tracking new viruses is no small task—scientists estimate that there may be as many as 1.6 million viruses in animal populations that we don’t know anything about. And, as many as half of those may have the potential to infect humans. International efforts to identify, catalog, and track viruses have been underway for years.

In the United States, PREDICT was established in 2009 to “strengthen global capacity for detection and discovery of zoonotic viruses with pandemic potential.” However, it only received $207 million in funding over the course of a decade, so it had to be extremely selective about which viruses were researched and where. Despite that, PREDICT “identified almost 1,000 novel viruses, including 160 potentially dangerous coronaviruses, and created a risk map of where zoonotic dangers lie.” PREDICT was shut down in December 2019 right before the COVID-19 pandemic took hold, but was temporarily reinstated and will be replaced by a new program called STOP Spillover.

Another effort is the Global Virome Project, “a 10-year collaborative scientific initiative to discover unknown zoonotic viral threats and stop future pandemics.” The project’s goals are lofty but necessary, particularly in light of the COVID-19 pandemic, and range from identifying the majority of zoonotic viral threats to establishing legal, regulatory, and ethical frameworks to share knowledge and data. Zoonotic infectious diseases have emerged more frequently over the last hundred years, and are likely to continue to do so because of population growth, industrialization, intensive farming, urbanization, rapid transportation, and climate change. As we struggle with COVID-19—scientifically, medically, economically, and personally—it’s clear that we need to continue to expand global efforts to fight these emerging infectious diseases.