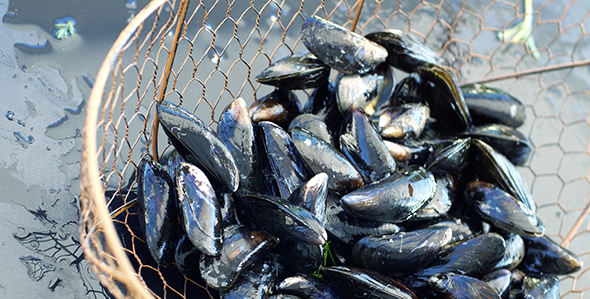 by the bioMérieux Connection Editors

As “filter feeders,” mussels provide a great method for detecting pollutants in waterways. If it’s there, mussels will ingest it. With this in mind, Washington Department of Fish and Wildlife (WDFW) started the Puget Sound Mussel Monitoring Program: every two years, the WDFW transplants uncontaminated mussels from aquaculture facilities to dozens of locations in Puget Sound to study pollutant concentrations and to provide some metrics on the impact of urbanization, industry, agriculture, sewage and storm water runoff, as well as other factors are on Puget Sound.

In the first study, completed two years ago, the effort not only revealed the presence of PCBs, DDTs, various hydrocarbons and multiple heavy metals (lead, copper, zinc, mercury, arsenic and cadmium) in the tissues of the native mussels (Mytilus trossulus), the pattern of distribution also provided strong clues to the sources of these contaminants and how these chemicals and metals enter the waterway.

While the results of the second study, completed earlier this year, have yet to be published, The Puget Sound Institute, which participated in the study, said that tissue analysis of mussels in this latest study revealed antibiotics, antidepressants, heart medications, a chemotherapeutic drug and trace amounts of the opioid oxycodone.

While the opioid concentration found in the shellfish was very small, this appears to be the first time an opioid has been detected in a major U.S. waterway. According the CDC, America is in the midst of an opioid addiction epidemic. In 2016, deaths by drug overdoses totaled 63,632 in the U.S. with two-thirds of these fatalities attributed to prescription and illicit opioids, according to the CDC.

According to a statement released by the Puget Sound Institute: “The areas where the oxycodone-tainted mussels were sampled are considered highly urbanized and are not near any commercial shellfish beds.”

“You wouldn’t want to collect (and eat) mussels from these urban bays,” said Andy James of the Puget Sound Institute and one of the researchers in the latest Puget Sound Mussel Monitoring Program study.

While the Puget Sound Institute did not reveal which specific antibiotic was detected in the tissue of mussels, antibiotic producers are ahead of schedule in efforts to reduce environmental contamination, according to The AMR (Antimicrobial Resistance) Industry Alliance:

“Pharmaceutical companies, particularlythose that made bold commitments in the Industry Roadmap for Progress on Combating Antimicrobial Resistance, are taking action to reduce the potential impacts of antibiotics manufacturing on AMR. According to the first Alliance Progress Report, one third of the Alliance companies that produce antibiotics currently have a strategy, policy or plan in place to address the issue of the release of antibiotics in their own manufacturing effluent that may contribute to AMR. Three quarters of them anticipate the implementation of good practice methods to reduce environmental impact of manufacturing discharge by 2018, well ahead of the 2020 target.”

The AMR Industry Alliance is one of the largest private sector coalitions set up to provide sustainable solutions to curb antimicrobial resistance. It counts over 100 biotech, diagnostics, generics and research-based pharmaceutical companies and associations in its membership.