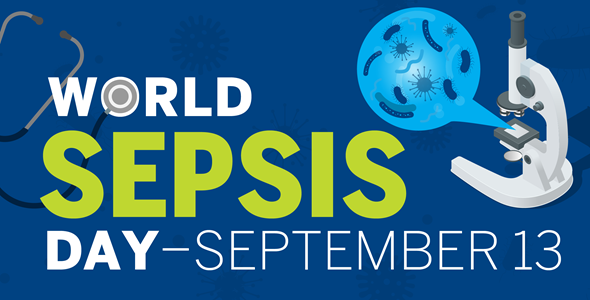 September 13, 2021, marks the 10th anniversary of World Sepsis Day. Recognized on September 13 each year, World Sepsis Day is an impactful initiative by the Global Sepsis Alliance aimed at decreasing the worldwide burden of sepsis. Awareness is important to help the public recognize the early signs of sepsis and seek medical care for rapid diagnosis and effective treatment.

Sepsis is the body’s life-threatening response to an infection, and it affects up to 50 million people worldwide each year. It is also a leading cause of death in U.S. hospitals.  While awareness of sepsis has increased over time, there is still room for substantial improvement.

Progress and Plans for Continued Improvement

In the US, a 2011 survey found that only 40% of individuals in the United States had heard of the term “sepsis”. In the decade since, Sepsis Awareness Month and World Sepsis Day were proclaimed in order to address the growing need for sepsis education.

Thanks to those and other initiatives, awareness of this life-threatening condition has increased, and a 2020 survey reported that 71% of people living in the United States had heard of sepsis.  However, familiarity with the word “sepsis” does not equip people with the knowledge to prevent it, and only 14% of respondents could properly identify common sepsis symptoms. Sepsis continues to be a prevalent and dangerous condition, especially for those in high-risk groups.

Make a Difference in the Fight Against Sepsis

Anyone, regardless of age or health, can get sepsis. But, it’s also possible for everyone to make a difference in the fight against sepsis.

The Global Sepsis Alliance has outlined ways you can get involved on World Sepsis Day and join in the fight to stop sepsis, including:

Visit https://www.worldsepsisday.org/wsd2021 to learn more and view additional ways to get involved on World Sepsis Day!