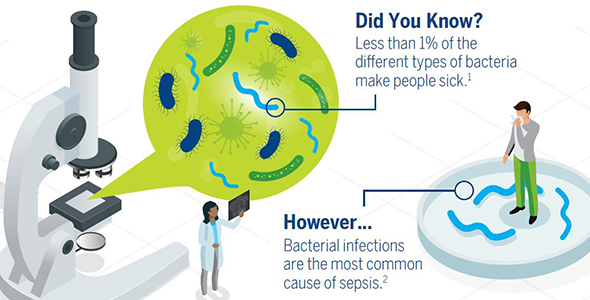 Bacterial infections are the most common types of infections that lead to sepsis. Sepsis is a life-threatening condition that can result from an infection anywhere in the body. Severe cases of sepsis often come from infections that are affect the whole body and spread through the bloodstream. Of the more than one million Americans who develop sepsis each year, 15-30% of those people die.

Bacterial infections can develop in several ways, including from open wounds, surgical wounds, burns, consuming contaminated food or beverages, and breathing airborne bacteria. Those with the highest risk of developing infections include children, the elderly, and people with compromised immune systems.

Bacterial infections are treated with antibiotics, while fungal and severe viral infections are treated with other types of drugs (antifungals and antivirals, respectively). Healthcare teams consider the full picture when prescribing treatment, including the site of infection, the bacteria, and antibiotic sensitivity based on local patterns of antibiotic resistance. According to the authors of, Antibiotic Resistance in Sepsis Patients: Evaluation and Recommendation of Antibiotic Use, failure to define any of those elements can potentially lead to an inappropriate antibiotic selection. Appropriate use of antibiotics is critical for surviving sepsis.

The increase in both community- and hospital-acquired antibiotic-resistant bacteria can make it more difficult for doctors to find an appropriate antibiotic. Infections that are not treated rapidly and properly can become severe, and in turn have fatal consequences. A long duration of broad-spectrum antibiotic use is one of the largest contributors to antimicrobial resistance.

The Centers for Disease Control and Prevention uses three threat levels to classify how serious the antibiotic resistance threat is for particular pathogens. Classified pathogens are either given Urgent, Serious, or Concerning threat titles. The three threats classified as Urgent are Clostridium difficile, CRE (Carbapenem-resistant Enterobacteriaceae), and Nesseria gonorrhoeae. In 2013, the report ranked 18 threats total. A new report is projected to be released in the fall of 2019. It isn’t possible to prevent all bacterial infections but taking certain steps can help. Sepsis Alliance recommends washing your hands frequently and keeping wounds cleaned and covered. Being alert and aware of the signs of an infection can also help patients receive appropriate treatment sooner. To learn more about the symptoms of sepsis, visit: Can You Spot Sepsis?