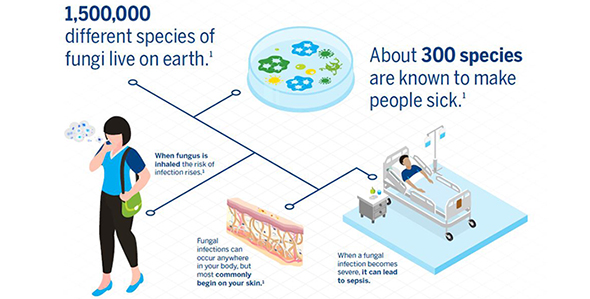 Approximately 15% of all infections are caused by fungi, and invasive fungal infections are an increasingly frequent cause of sepsis, particularly in critically ill patients. Sepsis is a life-threatening condition that can result from an infection anywhere in the body. Severe cases of sepsis often come from infections that affect the whole body and spread through the bloodstream. Of the more than one million Americans who develop sepsis each year, 15-30% of those people die.

Candida species are by far the predominant cause of fungal sepsis, accounting for about 5% of all sepsis cases. Candida accounts for 70–90% of all invasive fungal infections and Aspergillus accounts for 10–20%. Candida are commonly found in healthy amounts in the throat, gut, and vagina, but Candida yeasts can cause an infection when they grow out of control. People who have compromised immune systems are at the highest risk of developing fungal infections.

Invasive Candida infections are associated with a high mortality rate. Early diagnosis of invasive candidiasis (a serious Candida infection in the blood or internal organs) is critical in order to initiate antifungal treatment promptly. According to the authors of Invasive Candidiasis as a Cause of Sepsis in the Critically Ill Patient, several studies have shown that inappropriate treatment or delays in the introduction of appropriate antifungals are associated with increased mortality in patients with candidemia (a Candida bloodstream infection) or septic shock due to Candida.

Fungal infections are treated with antifungal medications. Antifungals differ from antibiotics, but they are similarly affected by antimicrobial resistance. Antifungal resistance poses a threat particularly to people with Candida infections. According to the Centers for Disease Control and Prevention (CDC) some species of Candida are resistant to both first- and second-line antifungal medications, making them very difficult to treat. About 7% of all Candida bloodstream isolates (pure samples of a germ) tested by the CDC are resistant to fluconazole, a first-line antifungal. Candida auris is emerging as a serious global health threat for not only being difficult to treat but also difficult to identify.

Fungi are everywhere—they live outdoors as well as indoors and can infect any part of your body. Common skin infections may be mild and look like a rash. More serious lung infections can present symptoms similar to flu. To learn more about fungal infections, as well as signs and symptoms, visit the CDC’s Fungal Infections page.