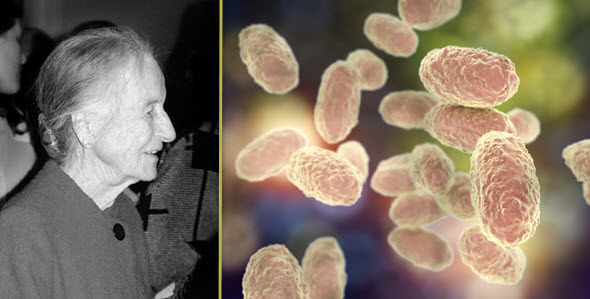 Leila Alice Daughtry Denmark, MD, passed away on April 1, 2012 at the age of 114. This pioneering physician-scientist attended the Medical College of Georgia and was the only woman out of 52 students in her class. When she graduated in 1928, she was just the third woman to graduate with a medical degree from MCG. Thirteen years prior to her death, Dr. Denmark—celebrated as “the oldest practicing physician in the U.S.”—reluctantly retired in 2001, seeing her last patient at the age of 103. One of the first female physicians to practice in the city of Atlanta, Dr. Denmark saw patients for over 70 years!

In 1931, her first year of private pediatric practice, a severe epidemic of whooping cough took the lives of many of Dr. Denmark’s young patients. Whooping cough is a highly contagious respiratory tract infection caused by Bordetella pertussis and is particularly dangerous for children below the age of 12 months. Dr. Denmark decided that a whooping cough vaccine was desperately needed and began a research effort along with scientists from Emory University that led to the first pertussis vaccine.

Dr. Denmark’s work has spared millions from this infection and saved an untold number of lives worldwide. According to the Centers for Disease Control and Prevention (CDC), there were approximately 100,000 cases of whooping cough per year prior to the pertussis vaccine in the U.S.  Following the introduction of the vaccine, annual cases in the U.S. dropped below 10,000. Before the whooping cough vaccines were recommended for all infants, about 8,000 people in the U.S. died each year from whooping cough. Today, because of the vaccine, this number has dropped to fewer than 20 fatalities per year.

In addition to many awards and honors, Dr. Denmark received the Fisher Award In 1935 “for outstanding research in diagnosis, treatment, and immunization of whooping cough for her work on the vaccine”. To learn more about this remarkable physician and scientist, read the National Institute of Health’s Changing the Face of Medicine online biography and Dr. Denmark’s obituary published by the Atlanta Journal Constitution.