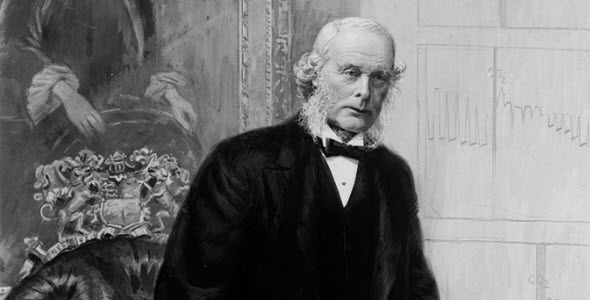 A pioneer of modern surgery, Joseph Lister was born in 1827 in Essex, England. While he was a student in 1846 , he was present at the first surgery performed under anesthesia. Six years later, Lister became a fellow of the Royal College of Surgeons in 1852. Known as the “Father of Antiseptic Surgery,” it was Lister’s work in battling surgical infections that made him famous and has saved an incalculable number of lives.

Lister was a keen student of Louis Pasteur, particularly interested in using heat to sterilize microbiological media. In the same way Pasteur demonstrated that heat could prevent fermentation, Lister believed that wound “putrefaction”—so common in post-surgical patients—was a form of fermentation.  Since heat sterilization isn’t feasible for the treatment of wounds, Lister took great care to keep surgical wounds clean and then bandaged them with clothe soaked in phenol, which was discovered not long after Lister’s birth. But it was Lister who recognized the antiseptic qualities of this simple aromatic compound with the chemical formula C6H5OH. He used it to bandage wounds, sterilize surgical instruments, clean surgical suites, and for hand-washing prior to surgery.

Lister immediately began to see a dramatic increase in surgical survival rates, which were alarmingly low in the middle of the 19th Century. According to the Royal College of Surgeons: “Between 1864 and 1866, before the use of antiseptic treatment, 46% of Lister’s surgical patients died. In contrast, from 1867 to 1870, only 15% died.”

Soon, surgeons around the world adopted “Listerian surgical principles,” and surgical survival rates began to rise. While phenol is no longer used as a surgical antiseptic, Lister’s principles for antiseptic surgery remain the gold standard today.  To learn more about Joseph Lister, visit his biographical page at the  Royal College of Surgeons.