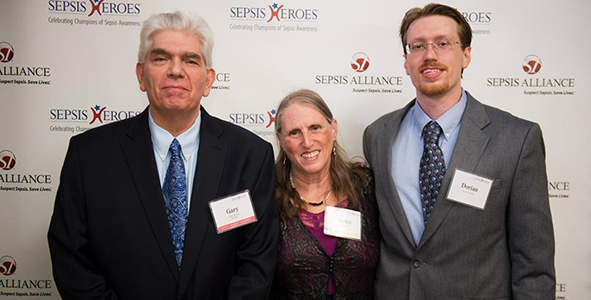 Gary Black, sepsis survivor and a 2015 bioMérieux Sepsis Champion, doesn’t allow sepsis to define him. In the last year, he published another book, underwent a second hip replacement, and still found time to speak to critical care doctors and nurses, as well as sepsis survivors around the country.

In July of 2009, Gary’s life changed dramatically when he was overcome by severe sepsis and nearly died.

“My condition quickly deteriorated. Severe sepsis was overwhelming me while I suffered acute renal failure, acute liver failure, severe pain, rapid breathing, and a fever sometimes peaking at 104.9 degrees. I also suffered extensive edema, jaundice, and was disoriented with delirium and multifactorial encephalopathy. I felt desperate as I felt myself moving toward the edge of death. The doctors told my wife, Nancy, that if I did not improve in the next 24-48 hours, I would die.”

After 14 days in the ICU and 17 days in a rehab hospital, totaling 31 days at Wake Med Hospital in Raleigh, NC., Gary endured 15 months of recovery. Gary faced severe cognitive and emotional side effects from his long battle with sepsis.

In 2008, the Journal of Intensive Care Medicine published a study on patients who suffered from Post-Traumatic Stress Disorder (PTSD) and depression following severe sepsis titled, “Factors associated with posttraumatic stress symptoms in a prospective cohort of patients after abdominal sepsis”.

The study concludes, “The proportion of patients with “moderate” PTSD symptom scores was 28%, whilst 10% of patients had “high” PTSD symptom scores. Only 5% of the patients expressed severe depression symptoms. Factors associated with increased PTSD symptoms in a multivariate ordinal regression model were younger age, length of ICU stay, and having some or many traumatic memories of the ICU or hospital stay.”

These results echo what was revealed in a 2001 study published in Anaesthesia, in which researchers determined that 47 percent of patients who responded to a questionnaire after ICU discharge said they suffered from a significant degree of anxiety and/or depression related to their ICU experience. These symptoms met the level of a PTSD diagnosis in 10 percent of the patients.

According to the Sepsis Alliance, “People who have been treated in an intensive care unit (ICU) are at risk of developing what many call post-intensive care syndrome (PICS). PICS symptoms can include depression, anxiety, and PTSD (post-traumatic stress disorder), a recognized mental health condition.”

“The effects of severe sepsis are far reaching and potentially devastating,” says Gary, from his home in Raleigh, NC. “The syndrome of sepsis has a plethora of signs, symptoms, and challenges that can occur together to collectively bring about stunning emotional, physical and cognitive issues.”

While PTSD is most often associated with soldiers who face extreme combat stress, it can be triggered by virtually any sustained traumatic event. “What some people may not realize is that an event such as sepsis, a life-threatening illness, is also an assault on the body. And by extension, a stay in an ICU with its 24-hour per day hustle and bustle, can also be an assault on the system,” Gary says. “In my case,” he adds, “the psychological trauma at the onset of sepsis was like a whole-body alarm system going off at once. Imagine going into an old telephone exchange switch box and tampering with the control and relay boards, confusing the calls and signals creating mayhem that becomes an assault on the human body from all directions…that’s sepsis and your immune system gone awry.”

Gary has presented on PICS at the Society of Critical Care Medicine, the PICS Stakeholders Conference, and dozens of other clinical and patient support groups. He also contributed to research projects, including a PICS project and article that was published in American Nurse Today. Gary was a co-author of that paper along with three nurses and educators.

“Emotional and cognitive issues range from mild to severe, from temporary to permanent disability,” says Gary. “These issues are not addressed very much at medical conferences, especially delirium and PTSD.” Gary believes that medical students are not sufficiently trained to identify these issues with patients following traumatic health crises.

So, Gary is a man with a mission: to spread the word about PICS so that other patients don’t feel the isolation he experienced following his close call with sepsis. His first book, Gyroscope, A Survival of Sepsis, details his experiences. Gyroscope also includes 52 illustrations he drew during his 15-month recovery.

While recovering, Gary faced some cognitive challenges due to mild multifactorial encephalopathy, which was temporary, as well as a plethora of emotional side effects, a weakened immune system, and chronic physical exhaustion. Many of those elements are shown in the drawings in his book. His recovery process resulted in a physical operating ability of about 90% of his previous physical strength and 100% recovery of his cognitive functions.

Recently, Gary underwent a hip-replacement surgery so had to slow down on his travel. He was slated to speak in Mexico City, but had to cancel because of his challenged immune system and his doctor’s concern that he might develop a tropical infection.

But, none of that has slowed his writing. Recently, Gary completed a novel about geriatric patient abuse called, The Wake, which is one of nearly a dozen titles he has written or co-written. More recently, he published, Depth of Field, a political thriller.

Gary says he will continue to educate people about sepsis and speak on the topic, because there is still so much we don’t know.

“Doctors quick to recognize sepsis rush to ameliorate the onset with rapid, accurate treatment. Researchers ferret out facts about sepsis, develop hypotheses to determine cause and effect and interventions for treatment and management, and yet sepsis continues to be a medical conundrum.”

While sepsis is and should be the focus intense scientific research, Gary also hopes that his work will help lead to a greater understanding of the sepsis survivor and the aftermath of this devastating condition.

One Reply to “Gary Black, Sepsis Survivor and Patient Advocate, Continues to Educate the Public on Post-Intensive Care Syndrome”