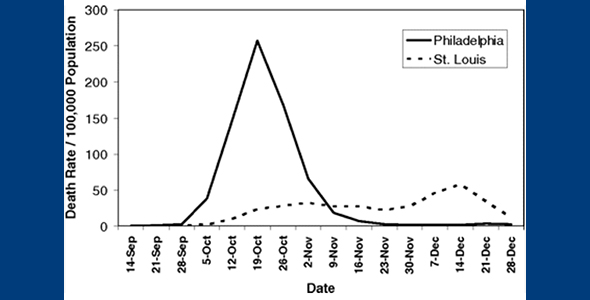 If geography truly is destiny, this saying was never more true than during the influenza pandemic of 1918. Where you lived often determined if you survived, with high fatality rates in large cities, overcrowded military bases, and the congested refugee camps that housed the displaced during World War I.

In 1918, Philadelphia had a population of 1.7 million with an additional 300,000 crowded into the city as a result of industrial ramp-up for America’s entry into World War I. At the outset of the pandemic, 75% of Philadelphia’s hospitals’ medical and surgical staffs were overseas for the war.

Influenza first appeared in Philadelphia at the city’s sprawling naval shipyard on September 18, 1918. The following day, over 500 sailors were ill. Hospitals across the city saw a sharp increase in influenza patients on September 19. Ten days later, the city made a fateful decision: despite protests, the city did not cancel a parade for the war effort. On September 28, 200,000 people gathered for the event.

On October 4, there were 636 new cases reported in Philadelphia and 139 deaths. By October 10, over 500 were dead, and panic gripped the city. At the peak of the Philadelphia epidemic, 1,700 died on a single day.

“The contrast of mortality outcomes between Philadelphia and St. Louis is particularly striking,” according to Richard Hatchett, Carter Mecher, and Marc Lipsitch, the authors of Public health interventions and epidemic intensity during the 1918 influenza pandemic.

“The first cases of disease among civilians in Philadelphia were reported on September 17, 1918, but authorities downplayed their significance and allowed large public gatherings, notably a city-wide parade on September 28, 1918, to continue. School closures, bans on public gatherings, and other social distancing interventions were not implemented until October 3, when disease spread had already begun to overwhelm local medical and public health resources.”

While the surge in population and the shortage of doctors and nurses played a role in the death toll in Philadelphia, nearly every major city in the U.S. was contending with these same problems. According to Hatchett et al., the greatest problem in Philadelphia was the absence of leadership needed to curtail the spread of influenza. Their proof? St. Louis.

“In contrast, the first cases of disease among civilians in St. Louis were reported on October 5, and authorities moved rapidly to introduce a broad series of measures designed to promote social distancing, implementing these on October 7. The difference in response times between the two cities (≈14 days, when measured from the first reported cases) represents approximately three to five doubling times for an influenza epidemic. The costs of this delay appear to have been significant; by the time Philadelphia responded, it faced an epidemic considerably larger than the epidemic St. Louis faced.

St. Louis benefited from the leadership of Dr. Max C. Starkloff, Health Commissioner for the city of St. Louis. Like in Philadelphia, the disease first appeared at a military base in St. Louis, the Jefferson Barracks, which was 10 miles from the city. By Oct. 1, a handful of influenza cases were reported at Jefferson Barracks. Within days, the numbers soared to 500.

Starkloff closely monitored these developments and didn’t hesitate to close schools almost immediately. He went on to close factories, theaters and retail outlets. Starkloff faced intense pressure from St. Louis merchants, public school officials and politicians to reopen these facilities, but he refused. Schools were closed for nearly 3 months, as were many other population hubs.

But the citizens of St. Louis benefited from Starkloff’s insistence: “When discussing the history of the tragic 1918 influenza epidemic, St. Louis is often held up as a model city. Because of the quick and sustained action by its leaders, St. Louis experienced one of the lowest excess death rates in the nation, just 358 per 100,000 people.”

8 Replies to “How Public Health Policies Saved Citizens in St. Louis During the 1918 Flu Pandemic”