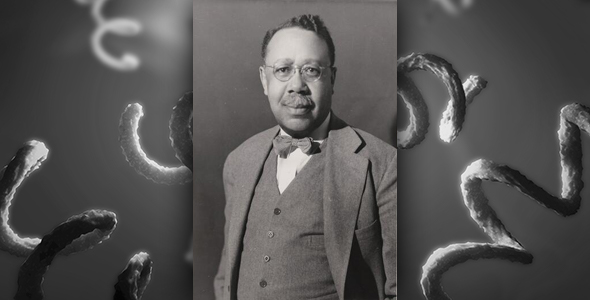 William Augustus Hinton was a groundbreaking bacteriologist who was best known for developing blood tests to detect syphilis. Syphilis is a bacterial infection that, after being present for many years without treatment, can cause widespread organ damage and death. During his career, Hinton became the first Black person to write a medical textbook in the U.S.— Syphilis and its Treatment, published in 1936.He was also the first African American to be promoted to professor at Harvard University.

Hinton was born in Chicago in December 1883 to freed slaves. Both of his parents farmed, and his father also worked as a railway porter. In 1905, after graduating high school and attending the University of Kansas for a couple years, Hinton earned a baccalaureate degree in science from Harvard College. He spent his time after college teaching at numerous universities throughout Illinois, Tennessee, and Oklahoma while furthering his study of physiology and bacteriology. Hinton matriculated at Harvard Medical School in 1909. He graduated with honors in 1912.

Dr. Hinton was impacted by racial prejudice throughout his career as a medical doctor. Upon graduation, he sought a position in surgery but was barred from hospitals in the Boston area. He instead took a position teaching serologic techniques at the Wassermann Laboratory. While in this position, he became familiar with serologic methods for laboratory diagnosis of syphilis. He performed autopsies on those who passed away from suspected syphilis and conducted research. The assay that Hinton soon developed to test for the disease had a high specificity and was novel for its time.

60 years after his death, Dr. Hinton and his accomplishments were acknowledged with a formal unveiling of his portrait in Gordon Hall’s Waterhouse Room at Harvard University. The Hinton painting was requested by the Harvard Foundation for Intercultural and Race Relations, in an effort to bring more diversity to University artwork.

“Professor Hinton was indeed a pioneer. A brilliant thinker, experimentalist and a force for good in the service of humankind,” said the Dean of Harvard Medical School, George Q. Daley during the unveiling ceremony that took place on September 10, 2019. “He changed the world and made Harvard Medical School a better place in the process.”