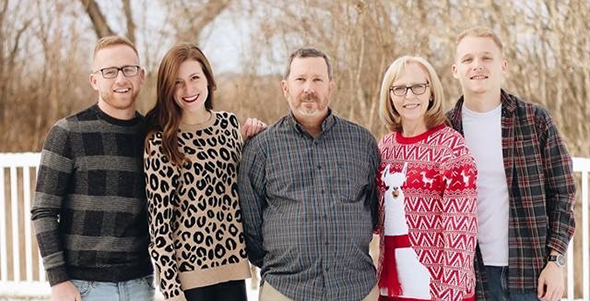 Barb Hammond, a microbiologist at bioMérieux who has been with the company for more than 30 years, loves being outdoors, spending time with her family, and training her golden retriever in competitive dog sports. But last year, Barb’s usual routine came to screeching halt when she became septic after a surgical procedure.

On May 7, 2019, Barb had surgery to remove two large blockages in her small intestine. At first, it seemed that the surgery was successful, even though the recovery process was extremely difficult. About two weeks later though, it became clear that something was wrong. On May 23, 2019, Barb woke up feeling terrible. Initially, she thought she was just dehydrated, but as the morning wore on, she became weaker and could barely walk, so her husband, Curt, rushed her to the emergency room. There, the nurse taking Barb’s vitals noted that she had a high fever and extremely low blood pressure—two important signs of sepsis.

The nurse raised the alarm, and the clinical team rushed Barb back to a room, where they immediately drew blood for cultures and began a course of intravenous antibiotics.  A CT scan revealed that Barb’s surgery site had perforated and was leaking bowel content into her abdomen, resulting in a systemic infection and sepsis.

Doctors performed emergency surgery to repair the perforation and other damage caused by the leakage and infection.  After surgery, Barb stayed in the ICU for two days before moving to a regular room to continue her recovery. It turned out that the bacteria causing the infection were Klebsiella pneumoniae, a pathogen that is a common underlying cause of sepsis.

Some strains of K. pneumoniae are resistant to antibiotics, making them difficult to treat. In Barb’s case, the bacteria were susceptible to a few different antibiotics, so her infectious disease doctor could select the one that worked best for her situation. That turned out to be Piperacillin-Tazobactam, which was the antibiotic that Barb’s doctors gave her when she was initially admitted for sepsis. The infectious disease doctor tried briefly to switch Barb to different antibiotics (Ceftriaxone and Metronidazole), but Barb had an adverse reaction to those drugs. Having multiple treatment options available to account for patient reactions to drugs is one reason why good antibiotic stewardship practices are important.

Over the course of her hospital stay, Barb’s husband, Curt, was with her constantly. “Curt was a champ,” said Barb. “He came every morning. Then he would go home around noon and take care of the dogs and the house. Then he would come back at dinner time and stay until 9:00. He was so good and so patient with me. I can’t even imagine the emotions he went through watching this all happen.”

Barb spent about two weeks in the hospital before being allowed to go home. Even then, her recovery was not yet over.  “Because the original surgery failed and I developed septicemia and abscesses, an ostomy was necessary to let my bowels and internal organs heal,” said Barb. “I ended up having Short Bowel syndrome.  I lost so much weight that I was under 100 pounds at this time and was just skin and bones.  It hurt to sit for any length of time.” The malnutrition resulted in Barb’s electrolytes getting, “out of whack,” as she put it, and so she had to be readmitted to the hospital. Her doctor put her in the cardiac wing because such low levels of potassium had the potential to adversely affect her heart.

This time around, Barb spent about a month in the hospital, dealing with one complication after another. “I was taking Potassium orally daily.  But they could never get my potassium levels to stabilize.  My iron dropped so low I had to have iron infused.  My skin all peeled off and my hair started to fall out.  Every day I dropped about a half a pound and I was now down to about 90 pounds.  My kidneys were starting to have issues, so a nephrologist got involved,” said Barb. She started on total parenteral nutrition (TPN), managed by the nephrologist.

However, malnutrition remained an issue. Barb said that, “The docs also started talking to me about a drug called Gattex® [teduglutide].  It helps the intestinal villi to adapt quickly and adsorb nutrients at a greater frequency.  But it’s a hormone and could cause any cancerous cells in my body to take off and start replicating.  So, I had to think about it.”

While Barb was talking with doctors and thinking over whether to start the teduglutide, her chest filled up with fluid and she had to have two thoracentesis procedures performed.  “It was scary having a needle shoved my back and then watching a liter bottle fill with fluid.  They removed over a liter on the right side and a full liter on the left,” said Barb, but, “I felt so much better afterwards.”

To even consider starting teduglutide, Barb had to undergo a colonoscopy to make sure that she didn’t have any colon polyps that the drug could “feed”, causing colon cancer.  While the results of the colonoscopy were positive, Barb decided to wait and see if her malnutrition issues would improve with the TPN therapy. Fortunately, she began to gain weight, and her electrolytes returned to normal levels.

Throughout her time at the hospital, Barb said that everyone who helped care for her was kind and helpful.  “I have a new appreciation for nurses,” she said. “They were great. I can’t say enough about every one of them. The night of the final Blues game, they would pop in my room and hang out to see the score. They would also hunt down cookies and popsicles and juice and snacks for me. The aids helped me with bathing and washing my hair (I actually had my first shower in 4 months during this time), and the janitorial staff was sweet and helpful.”

Finally, around mid-July, Barb’s doctors decided that she was ready to go home. But to do so, she needed to be able to infuse saline, PipTaz (piperacillin/tazobactam, her antibiotic), and the TPN. Getting her PICC line set up for that proved to be extremely difficult, and it led to one of her hardest days throughout the entire ordeal. The nurse wasn’t able to get the PICC line to work, and Barb couldn’t go home without one. Having the hope of finally going home, with one seemingly simple thing in the way, was crushing. Ultimately, Barb said, “One of my floor nurses came in and told me that they were going to send me to radiology to have the PICC put in that way, if radiology could squeeze me in their schedule.  At first, they said no.  And I was going to have to wait until the next day.  Tears started up again, and I don’t know what happened, but pretty soon I was in Radiology, and it was easy and quick.”

At home, Barb began a long process of regaining her strength. “I basically lived on the couch,” she said.  “And I had tons of equipment to do all of these infusions.  Curt was great about keeping it organized and unpacking it.”

Gradually, she regained weight.  “Each day revolved around the infusions,” Barb said. “Each day I felt better.” She scheduled her third surgery, to reverse the ostomy, for October 18, 2019.  She calls that date, “Put Barb Back Together Day.” The surgery was successful, but she then had to deal with the pain and recovery process afterward.

After more than a year, Barb finally felt like herself again. “I know how lucky and blessed I am. I know I could have died. I am back to work full time.  I have most of my strength back.  My hair is filling in. My taste buds are normal. My cloths fit again. I still get teary eyed thinking about everything my body went though.” But, she said, “Each day is a gift.”