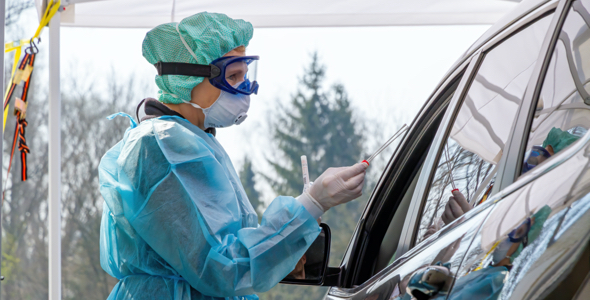 Although some countries have managed to effectively flatten the curve and curb the spread of COVID-19, new cases in the United States have been on an upward trajectory as phased re-openings occur throughout the country. While vaccines are being developed and tested, elected officials must make critical decisions regarding COVID-19 testing and guidelines to protect public health.

One of the most challenging aspects of the pandemic has been the prevalence of asymptomatic cases. For many other viruses, people are not contagious until they have symptoms, making it easier to screen for the disease and limit the chain of infection. This is not the case for COVID-19—people who are asymptomatic or pre-symptomatic can contribute to the spread of the virus without even knowing they are infected, making the pandemic extremely difficult to contain. Additional complexities include the different types of tests—those that test for the virus, and those that test for antibodies against the virus—and how they are used.

Both are important for an effective testing strategy, but they need to be leveraged correctly,” says Dr. Chris Cook, Head of U.S. Medical Affairs at bioMérieux. “That can be difficult because the tests are most accurate inside of certain time windows based on when a person was exposed to the virus. People may not adhere to those windows because they aren’t aware of them, or, in the case of asymptomatic patients, they may not know when they were exposed to the virus.”

How can we limit the transmission of COVID-19 from those who are asymptomatic? Many infectious disease experts believe universal mass testing could be the answer.

The Benefits of Universal Mass Testing

Effective mass testing would require testing people regardless of whether they have symptoms, and, ideally, for doctors to continue to check in with patients to see if symptoms develop over time. The value that this testing strategy could bring is two-fold: first, anyone infected with COVID-19 would be identified, regardless of symptoms, and second, more accurate data would be collected, which could improve our understanding of this novel virus. Most testing across the country has focused on high-risk and symptomatic patients, so current statistics largely exclude asymptomatic individuals—widespread testing could help epidemiologists gain a more accurate picture of the current spread.

The additional data gained from mass testing could also allow for an informed contact tracing strategy. If an asymptomatic patient tests positive, contact tracers could help patients recall and notify those with whom they have recently had close contact. Currently, there is not a national plan for contact tracing; all initiatives are regional and have seen varying degrees of success.

Unfortunately, there is no “perfect solution” when discussing COVID-19 testing strategies, and the idea of universal mass testing has received its share of skepticism from clinical professionals. Dr. Michael Hochman, a primary care physician and associate professor of clinical medicine at Keck School of Medicine Of USC, penned a recent Statnews article and pointed out the potential flaws of universal mass testing: testing result delays, false negatives and positives, and the possibility that testing locations might serve as hotbeds for viral transmission. He argues that “while mass Covid-19 testing might seem intuitive, its benefits are unlikely to meet the high expectations for it.”

Doctors David Lubarsky and Brad Pollock of UC Davis Health stated in late May that, “Testing everyone at frequent-enough intervals to impact the disease’s spread is impractical, expensive, and unlikely to be achieved.” They instead proposed focusing on targeted testing of key groups, including those with symptoms, individuals who are immunocompromised, frontline workers, people in confined, group living situations, and patients who are hospitalized. “Smarter testing, not just more testing, will improve health resources utilization and result in better tactics to control the future of this pandemic,” they concluded.

Ultimately, while the concept of universal mass testing is debated by experts, it would rely on significant coordination and committed, consistent decision-making across the country to get off the ground. In the meantime, there are still everyday actions that individuals can take to limit the spread of infection.

For example, emerging evidence suggests that consistent use of face masks could substantially reduce infection rates. Countries like Japan have experienced sustained low infection rates while re-opening their economy, which could be partly attributed to the wide-spread use and acceptance of masks in the country. In addition to masks, handwashing, disinfecting surfaces, and continued social distancing could have substantial benefits.

In late June, Dr. Anthony Fauci, director of the National Institute of Allergy and Infectious Diseases, discussed the impact that small, everyday actions can have. “We need to emphasize the responsibility that we have both as individuals and as part of a societal effort to end the epidemic. And if we are going to contain this, we’ve got to contain it together,” he said. He went on to urge Americans to wear masks in public spaces and in instances where social distancing is not possible.

One Reply to “Universal Mass Testing vs. Targeted Testing for COVID-19”