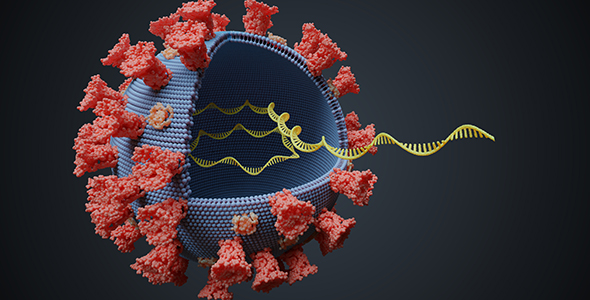 The ability to combat the SARS-CoV-2 virus through accelerated advancements in diagnostics, treatment and vaccine development relies on understanding how the virus is transmitted between people and accurately tracking mutations. Whole genome sequencing and subsequent analysis can provide a wealth of data and contribute important insights to this effort.

Whole genome sequencing is a relatively new technology that allows researchers to quickly replicate and view the entire genetic code of a microbe, down to the specific pairs of nucleotides that make up the microbe’s DNA or RNA. When researchers use whole genome sequencing they can begin to see small differences between those microbes. Using bioinformatics  tools, it’s possible to group genetically similar microbes and see trends related to mutations and where certain microbial strains have spread geographically.  Scientists worldwide are using this technology to gain a better understanding of the SARS-CoV-2 virus.

In a separate paper in the same journal, evidence also indicates that distinct strains are common on the east and west coasts of the United States.  The authors note that some strains may be more virulent than others, which, in addition to a range of other factors, could explain some of the variation in mortality rates.  The researchers say that, “It is unclear whether current serologic or viral PCR based assays are able to detect this variability. If this hypothesis is correct, it may be important to develop assays based on local viral clades, to determine the distribution of the virus and its spectrum of effects.”

Viral mutations could also affect vaccine development efforts. Vaccines target specific viral characteristics related to pathogenicity , such as the mechanism of infection. A preprint paper suggests that while the genetic code for the virus’s spike protein, which is required for entry into human cells,  has so far experienced mutations that might affect viral virulence and not the mechanism of infection, such a mutation is within the realm of possibility. Because of that, Martin Hibberd, professor at the London School of Hygiene and Tropical Medicine and corresponding author of the paper, said in an interview that, “This is exactly what we need to look out for. People are making vaccines and other therapies against this spike protein because it seems a very good target. We need to keep an eye on it and make sure that any mutations don’t invalidate any of these approaches.” He went on to add, “This is an early warning. Even if these mutations are not important for vaccines, other mutations might be, and we need to maintain our surveillance, so we are not caught out by deploying a vaccine that only works against some strains.”

Hibberd and coauthors concluded, “The worldwide whole genome sequencing effort is revealing the challenge of developing SARS-CoV-2 containment tools suitable for everyone and the need for data to be continually evaluated to ensure accuracy in outbreak estimations.” Continuing global surveillance through whole genome sequencing and analysis will be critical for successfully combatting the virus.

Among the efforts aimed at that goal is the CDC’s national viral genomics consortium, which launched on May 1, 2020. The program is called SARS-CoV-2 Sequencing for Public Health Emergency Response, Epidemiology, and Surveillance (SPHERES). According to the CDC, “With extensive participation from US clinical and public health laboratories, academic institutions, and the private sector, the SPHERES consortium aims to generate information about the virus that will strengthen COVID-19 mitigation strategies.” SPHERES will provide all data to open-source channels to facilitate global collaboration and, “help ensure that viral sequence data from across the United States is rapidly available for public health decision making and freely accessible to researchers everywhere.” To read more about SPHERES, visit the CDC’s website.