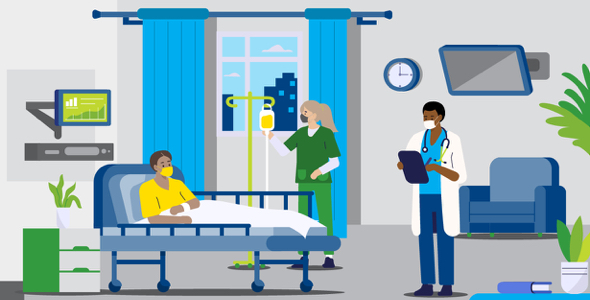 This week, we are celebrating National Hospital Week, and amid the COVID-19 pandemic, the observance could not have fallen at a more appropriate time. During this week, in addition to thanking our healthcare heroes, one thing we can all do is take a moment to look back on and appreciate the evolution of hospitals in our country. Our hospitals have made enormous strides over the past century, and their care and expertise save millions of lives each year.  It is critical to continue to support hospitals, their research, and their innovation so that we have the tools to meet new healthcare challenges and continue to save lives.

The History of Hospitals in the United States

In the 1700s and much of the 1800s, caring for the ill fell largely to families and communities. The first U.S. hospitals were built by communities to care of the sick, poor, and mentally disabled. Colonial and early hospitals were often funded by wealthy citizens who donated money as a part of their civic duty. But because physicians had not yet begun to apply scientific discoveries to medical practice, little effective treatment was available. These hospitals mainly served as a place for the poor who were sick to pass away.

The nation’s first government-funded institution for treating medical conditions was the Pennsylvania Hospital, founded in 1751 by Dr. Thomas Bond and Benjamin Franklin. At the time, Philadelphia was quickly growing, and the pair determined there was a need to care for the increasing number of sick, poor, and mentally ill. Bond had studied medicine abroad, and while in Europe had become impressed with a French hospital, called the Hotel-Dieu. He brought back the idea to create a hospital in Pennsylvania. Franklin became a strong supporter of the concept and was instrumental in gaining the government approval that led to the hospital’s creation.

By late in the 19th century, society had become increasingly industrialized and medical practices had grown in sophistication. The result was a gradual shift toward the professionalization of healthcare practices and eventually, a competitive market for medical services began to develop.

Between 1865 and 1925, hospitals in our country began to be transformed into institutes of science and technology. Louis Pasteur proved that microbial agents were the cause of putrefaction and shortly after, Robert Koch proved that bacteria could cause disease. In 1867, Joseph Lister published his work on sterilization techniques. In 1895, German physicist Wilhelm Conrad Roentgen took the first medical X-ray, paving the way for the use of the x-ray as a diagnostic technique. By 1925, the American hospital had become an institution committed to recovery and cures.

After World War II, President Truman urged Congress to pass a bill that would provide funds for the construction of hospitals and clinics. The Hill-Burton Act of 1946 allowed the federal government to aid in the creation of hospitals for the first time. As a result, hospitals were built or modernized around the country, and the National Institutes of Health (NIH) was able to expand, stimulating scientific research.

Today, there are over 6,000 hospitals in the U.S. and the healthcare industry is our nation’s largest employer. National Hospital Week 2020 highlights the mission of every hospital, health system, and healthcare provider involved in keeping our communities healthy. The American Hospital Association encourages Americans to use this week to thank healthcare providers and show gratitude for the services they provide.