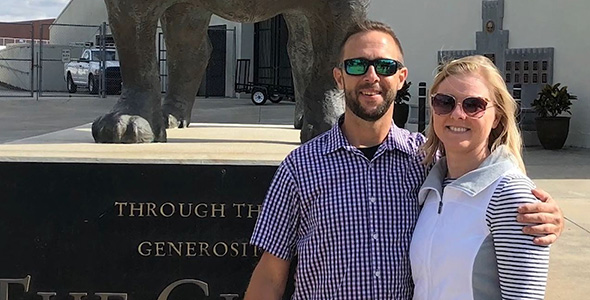 Anna Lopez spent a night in December 2018 nervously making the four-hour drive from Miami back home to Safety Harbor, Florida. Her fiancé, Todd, had been admitted to the hospital earlier that day, after his severe cold progressed to the point where he could barely walk. The following morning, Lopez heard his alarming diagnosis—sepsis. Sepsis occurs when an infection becomes severe and triggers changes in the body that can lead to organ failure or even death.

Waiting by her fiancé’s side, Anna asked the nurse about Todd’s procalcitonin (PCT) level. PCT is a substance in the blood that increases significantly with sepsis. She was told the level of PCT in her fiancé’s blood was so high it was unmeasurable. Anna is a field IT Specialist with the CSO Team at bioMérieux, and before her current role, she worked in hospitals as a microbiologist. Her knowledge of diagnostics gave her a deeper understanding of her fiancé’s diagnosis.

“I was trying to console him and not show complete panic in my face,” said Lopez. “I knew that it was serious and that was scary, but by the same token, he was getting the care that he needed.”

It all started just a week or so earlier. As holidays were in full swing, Anna and Todd both ended up sick with a viral bug.

“It wasn’t quite your typical cold, but we were fighting it,” said Lopez. “I got better but, basically, he didn’t.”

For Todd, what began as a severe cold became a debilitating illness. Four days after coming down with the bug, Todd still wasn’t feeling better, and he went to a walk-in clinic. He was diagnosed with bronchitis and given antibiotics and steroids. The weekend passed, and Todd continued experiencing coughing and malaise. On Monday, Anna left for a work trip. Midway into the week, her fiancé’s symptoms continued to get worse, and he began experiencing severe pain in his back. As the day went on, Todd became ill to the point where he could barely stand. Todd’s mom ended up going with him to the emergency room at Mease Countryside Hospital, and he was admitted.

Todd spent five days in the hospital fighting the infection. His blood tests were continually monitored to see if his PCT levels were coming down and if he was having a positive reaction to the treatment.

“It’s a waiting process, knowing that everything, the therapy or antibiotic, is working the way that it is supposed to,” said Lopez. “It was really a shocking situation to go through.”

The couple’s family practice physician visited Todd in the hospital and explained how incredibly serious Todd’s illness was and how lucky he was to be alive.

“She put things into a perspective that really scared us,” said Lopez. “At the same time though, she also helped us understand that Todd was going to get better and he was going to be able to pull through.”

“He didn’t have anything physically that affected him more so than just the morale and getting through the mental process of being sick,” said Lopez, describing Todd’s recovery process.

Todd’s immune system had taken a big hit though, so his doctor asked him to refrain from returning to work for two months while he recovered. He worked in an environment where he was around a lot of small children and needed to be especially cautious.

“It was something that we had to grasp going through the holidays, that he would have to take it easy and not exert himself physically too much,” said Lopez. “Just knowing that he was going to have to take this time to recover, you’re never really anticipating or expecting it.”

“Today Todd is doing really well,” Lopez expressed. There were about three months where he was asked to ease back into his normal routine. “He had to take it easy before he could get back into running again and exerting himself in a more demanding way. In some ways he’s considered lucky that there weren’t more lasting effects from his illness.”

Sepsis can happen to anyone. It occurs unpredictably and can progress rapidly when an infection becomes severe. In the United States, sepsis leads to death in 15-30% of cases.

“Todd was healthy and is a heathy person who takes care of himself,” said Lopez. “It was just a circumstance that led to him becoming septic. He didn’t have the chills or some of the other clinical symptoms that are typically indicators.”

“After everything is said and done, you’re researching why did this happen, how did this happen,” said Lopez. “It’s important that people don’t ignore that their cold is lingering.”

Lopez believes that raising awareness is key in the battle against sepsis.

“Being involved in the healthcare arena, you feel like you should be able to catch this stuff in your loved one and know that something is going on, but I didn’t know,” said Lopez.

When it comes to the battle against sepsis, diagnostics have a significant impact. Early treatment of sepsis improves chances for survival and the lowers the risk of long-term complications. Efficient diagnostics allow healthcare providers to choose the correct treatment, as quickly as possible.

“Our company is finding better and faster ways of diagnosing patients,” said Lopez. “Knowing that we have the way to find what’s making them sick faster, so we can respond better, I think that’s what’s really important about what we’re doing here at bioMérieux.”