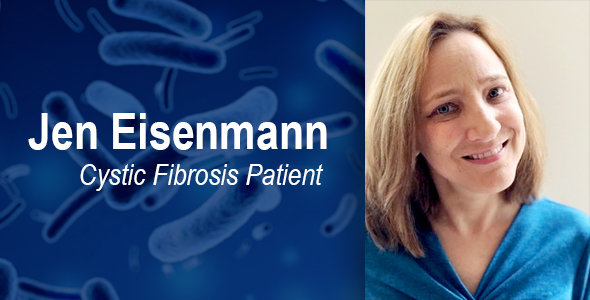 In May of 2016, Jen Eisenmann a 45-year old Durham NC resident, came down with a cold, which for most of us wouldn’t even be worth noticing. According to the CDC, every year in the U.S. there are one billion cases of the cold! In fact, most adults contract the rhinovirus—the causative microbe behind the common cold—two or three times per year. For the typical healthy adult, many of these infections go unnoticed or, at worst, manifest with a runny nose, scratchy throat and a low-grade fever.

But Jen, who has been fighting Cystic Fibrosis her whole life, is not a typical healthy adult and this bout with the “common cold” quickly escalated and culminated with Jen being fast-tracked for a double lung transplant. She had watched her lung function decrease over the years sometimes slowly, other times having a rapid decline. This was a rapid decline and the straw that broke the camel’s back.

“My doctor looked at me and said, ‘your lungs are done—it’s time for transplant’,” Jen said.

As a Cystic Fibrosis patient diagnosed at age one, these were words that Jen had long anticipated but also quietly hoped she would never hear. But CF patients learn to live with these kinds of rapid transitions. The progressive loss of lung function is unrelenting for the CF patient, but there can be long periods of relative normalcy until it is shattered by a complication.

“CF is a disease marked by periods of relative stability, or plateaus, followed by declining health,” said Jen. “Some plateaus are short, some long; some declines are gradual, some devastating.”

“At that point, I was fast tracked to get listed for a lung transplantation,” said Jen. “There was a long series of tests before I was listed on July 5th, 2016. I underwent a double lung transplantation on Dec. 14, 2016. 2017 was really tough from both the recovery from such a major surgery and the adjustment to all the medications I now take.”

Donor organ recipients must receive large doses of anti-rejection medications in the weeks and months following surgery. While the dosages often decrease, the medications, which suppress the immune system in order to prevent an immunological attack of the donor tissue, must be taken for a lifetime. There are often dietary restrictions and a variety of supplements that must be taken daily as well. All of these new medications are layered on top of Jen’s CF medications.

To support their weakened immunity, these patients typically must take daily doses of anti-infective drugs to fend off the microbes their immune systems no longer recognize. Patients must also pay very close attention to the earlies signs and symptoms of minor infection, from slight fevers to body aches, in order to avert escalating infections.

To complicate matters even further, all of these medications take a toll on the kidneys and the liver. In fact, many lung transplant recipients eventually require kidney transplantation due to this damage.

According to the Cystic Fibrosis Foundation, “Cystic fibrosis is a progressive, genetic disease that causes persistent lung infections and limits the ability to breathe over time. In people with CF, mutations in the cystic fibrosis transmembrane conductance regulator (CFTR) gene cause the CFTR protein to become dysfunctional. When the protein is not working correctly, it’s unable to help move chloride—a component of salt—to the cell surface. Without the chloride to attract water to the cell surface, the mucus in various organs becomes thick and sticky. In the lungs, the mucus clogs the airways and traps germs, like bacteria, leading to infections, inflammation, respiratory failure, and other complications. For this reason, minimizing contact with germs is a top concern for people with CF.”

While loss of lung function is the most prominent symptom of CF, the buildup of mucus and inability to balance fluids prevents the pancreas from releasing digestive enzymes essential for absorbing nutrients. So, many CF patients suffer from malnutrition and stunted growth, called Pancreatic insufficiency. This congestion also blocks the bile duct, causing liver disease. In men with CF, the same phenomenon often leads to infertility.

The genetic mutation within the CFTR that leads to CF is not singular. In fact, hundreds of different mutations to this gene lead to CF of varying severity. One of Jen’s 2 mutations is called Delta F508 and is one of the most common genetic polymorphisms responsible for CF. Her other mutation, N1303K, behaves the same way.

“I was born in 1971, and the doctors told my parents that I would be lucky to live to age 10, which was the average life expectancy of CF patients back then,” Jen said.

CF can be mild or severe, depending upon the type of mutation to the CFTR gene, as well as environmental factors, like the infections that a patient encounters in life and how diligently they comply with their medication.

“Honestly, I was pretty sheltered from CF and understanding just how dangerous it could be,” Jen said. “I think I learned more about the dangers of CF from a neighbor down the street than myself. This little girl was always much sicker than I was. As a result, I think I had a false sense of being safe.”

“She just celebrated 18 years post-transplant,” Jen said. “She travels a lot and does work with patient advocacy.”

Born in New York City and raised in Connecticut, it was college that brought Jen to the Carolinas where she enrolled at Furman University in Greenville, SC. After a few years in Michigan, she returned to South Carolina and now lives in Durham, North Carolina with her husband of 18 years, Pete.

“My husband works in real estate, so he has a lot of flexibility about where he lives, so we moved to Durham to be close to two of the world’s best lung transplant centers at UNC and Duke,” said Jen. By this time, Jen was retired completely, following 10 years of part-time work after some years of full-time work. In 2014, Jen had to start using oxygen, particularly at night because of diminished lung function caused by CF. By the time she was placed on the lung transplant waiting list, she was on high levels of oxygen 24/7.

After a long wait on the donor list, Jen and her husband received the call they had been hoping for, but while on the operating table being prepped for surgery, surgeons removing the lungs from the donor realized they were no longer viable.

“That was extremely deflating,” Jen recalled.

Jen and her husband returned to their routine as they waited for another call. Jen was eating 3,000-4,000 calories per day just to prevent weight loss. And, of course, travel was out of the question, since they needed to have a bag backed and be within an hour’s drive of the transplantation center all the time.

Together, they endured two more false alarms when they learned that a donor was available, only to find out that there was a complication.

“The fourth time was the charm,” Jen said. “We got the call and arrived at the UNC Chapel Hill at 1 p.m. on December 13, 2016. Twelve hours later, at 1 a.m. on December 14, the surgery began. From removal to transplantation, a double lung surgery can take as long as 15 hours. Thankfully, UNC happened to have two complete cardiothoracic surgical teams available to work simultaneously, so Jen was out of surgery by 6 am.

A double lung transplant is an extreme surgery, but Jen had to get on her feet as soon as the anesthesia wore off. Standing up every day is vitally important to recovery, even the day of surgery.

“The local newspaper from my South Carolina town was there and took a photo of me standing—with help—and at least 10 IVs coming out of me,” Jen said. “I made the front page!”

Jen remained on oxygen for over a month as she gradually grew accustomed to her increased breathing capacity. “The donor lungs are traumatized from the surgery, so you need to go slowly,” she said. “Plus, I was breathing so shallowly for so many years, I really didn’t have enough strength in my diaphragm and intercostal muscles, which lift your rib cage when you breathe—to do it on my own. It took some time.”

Jen also could not eat for the first thirty days following surgery, so was sustained via a feeding tube. She still struggles to maintain a healthy weight, which is common to CF due to pancreatic insufficiency. Due to the impact of the CFTR mutation, many CF patients do not release sufficient amounts of insulin and develop cystic fibrosis-related diabetes (CFRD). Jen was diagnosed with CFRD following her lung replacement and must now monitor her blood sugar and take insulin. Another common problem resulting from nutritional deficiencies among CF patients is osteoporosis, which Jen also has.

Jen said adjusting to all of her medications took longer than recovering from surgery. “It was about 10 months before I really felt like myself again, both physically and mentally.” It is not uncommon for post transplant patients to deal with depression and anxiety from the combined side effects of all the medication as well.

Since her surgery and long recovery, Jen began volunteering heavily with the Lung Transplant Foundation and is now President of the North Carolina chapter. She also does other volunteer work and has other hobbies. Cardio exercise is vital to keep Jen’s lungs clean and to stay healthy. Zumba is her favorite way to exercise. “I always loved to take Zumba dance exercise classes, which I had to stop. But now I’m doing it again, which is wonderful. My husband and I also rescue dogs so that keeps us busy.”

Jen doesn’t know who her donor is, but she did write the Carolina Donor Services to tell the donor’s family that she would like to meet them. “I waited about a year because they lost someone they loved right before the holidays, which I can’t imagine.” If the donor family is receptive, a meeting will be arranged. “I haven’t heard back yet, which I completely understand. One day, I hope, but no rush—there’s time for that.”