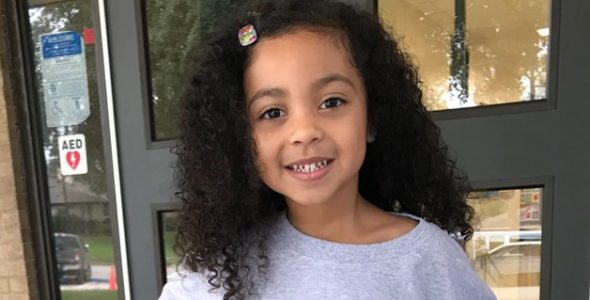 This past week, a 4-year-old girl became the first child to die from flu complications in Dallas County this season. Ashanti Grinage was initially diagnosed with the flu, but she was later found to have pneumonia as well, a common complication of flu.

KDFW reported that, “Ashanti’s father, Martell Grinage, says his daughter, who had no underlying health conditions, started showing symptoms of a cold Sunday evening after church. On Tuesday, they took her to the emergency room with a 103-degree fever. Tests determined she had Flu type A. She had not received a flu vaccine.”

Doctors sent Ashanti home with her family once her fever went down and recommended over the counter medications. But Ashanti’s mother brought her back two days later, when she noticed that Ashanti was very lethargic and was coughing up mucus.

By the time Ashanti’s father reached the hospital, doctors were trying to save his daughter’s life.

“The doctors told me when I got there, that her lungs were full of pneumonia and that they did the best that they could do,” Grinage said. Despite the doctors’ efforts to save Ashanti’s life, she died at the hospital that day.

Doctors didn’t check Ashanti for pneumonia when she first visited the hospital two days prior, and Grinage wishes he had asked them to.

“See, I feel like I failed because I’m not even 30 yet, and I’m about to bury my little girl,” Grinage said. He added that he wants other parents to know his family’s story, because it could help save their children’s lives.

According to Seth Toback, FAAP, MD, Vice President of Medical Affairs for bioMérieux, cases such as this are tragic for many reasons. “Unfortunately, pediatric mortality from influenza is not an unheard-of event even in the US, where the CDC estimates that approximately 100 children die from the flu each year.”

Most of those children are similar to the little girl in this story, according to Dr. Toback. Typically, they are previously healthy children who have not been vaccinated against influenza. This story highlights the importance of yearly influenza vaccination for everyone who is not contraindicated for the vaccine.

This case also highlights the importance of rapid in-vitro diagnostics, said Toback. “This tragedy illustrates the value of the biomarker, procalcitonin (PCT), to help assess if a secondary bacterial infection is present,” said Dr. Toback. “Even with good diagnostic evidence that a virus is the primary cause of infection, an elevated PCT level would alert the clinician to look for complications of the flu.”

Dr. Toback said that this case may also point out some of the deficiencies in the US medical system: “A routine case of influenza would typically not require an additional pneumonia test, or x-ray of the chest, if a competent physician does a detailed and complete history and physical examination, something that is not always done in a busy emergency department. Clinical cues to a possible secondary bacterial pneumonia may have been missed at the initial visit—all the more reason to run PCT tests. And, lastly, providing timely anti-viral therapy may have also helped to avoid this tragedy.”

Dr. Toback is a Board certified and licensed pediatrician with experience in office and hospital-based medicine, clinical research and medical affairs within the respiratory, infectious diseases, allergy, and vaccine therapeutic areas.