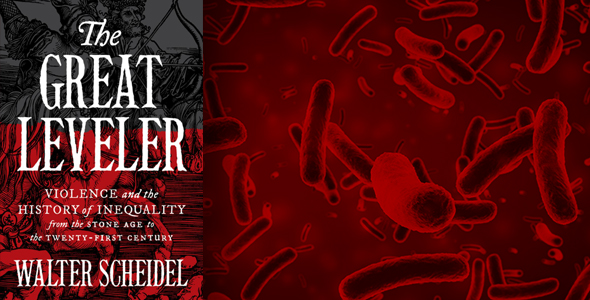 The Walton family, founder of Walmart, owns more wealth than 42% of American families combined, according to Scientific American. Three years ago, Scientific American reported that the top 20% of U.S. households own more than 84% of the nation’s wealth, while the bottom 40% own only 0.3%. Economists appear to agree that we are in an era of dramatic economic disparity.

Walter Scheidel, author of The Great Leveler: Violence and the History of Inequality from the Stone Age to the Twenty-First Century, asserts that the reason for this is the recurring cycle of wealth accumulation and redistribution resulting from war, revolution, and disease. He attributes the more egalitarian wages of 1965 to the first of what he calls the “Four Horsemen” of wealth redistribution: War.

In the aftermath of World War II, much of Europe and Asia was in ruins and needed to be rebuilt. Sadly, there were far fewer laborers available to do this work. As a result, wages increased and the middle classes in North America and Europe blossomed.

The three remaining Horsemen, as defined by Scheidel, are revolution, state collapse, and catastrophic plagues. Paradoxically, Scheidel lists the most devastating “Leveler” in history last among his horsemen: Infectious disease.

The first pandemic of bubonic plague at the end of antiquity, the Black Death in the late Middle Ages, and the merciless onslaught of smallpox and measles that ravaged the New World after 1492 claimed so many lives that the price of labor soared and the value of land and other capital plummeted. Workers ate and dressed better, while landlords were reduced to complaints that, as one English chronicler put it, ‘such a shortage of laborers ensued that the humble turned up their noses at employment, and could scarcely be persuaded to serve the eminent for triple wages.’ Surviving tax registers from late medieval Italy also bear witness to the sweeping erosion of elite fortunes.
– Walter Scheidel, The Atlantic, Feb. 21, 2017

While infectious diseases are still the greatest cause of death worldwide, it’s difficult to imagine the toll they took prior to vaccines and antibiotics.

When it comes morbidity and mortality, infectious disease has no peer—not even the massive human suffering from war comes close. For example:

But how exactly have catastrophic pandemics contributed to wealth redistribution? Scheidel points to the recurring plagues that devastated Europe in the 14th Century. Prior to these catastrophes, wealth was concentrated among a very small number of families. Most of Europe operated under a feudal system, and the vast majority of Europeans eked out livings in subsistence agriculture.

The great plagues changed all of that. According to Scheidel, the rapid and drastic population decline caused the price of labor to soar. Good jobs became more plentiful, so wages increased, allowing people to save. Subsistence farmers could then buy land and grow not only enough to feed their families, but a surplus, which they sold at market. As a result, ruling families no longer had a stranglehold on land and other assets, and the merchant class blossomed, its people becoming patrons of the arts and universities. The concept of leisure time was invented and, according to Scheidel, all of this coalesced into a movement that fueled the burgeoning Renaissance and Age of Enlightenment.

Scheidel is certainly not the first to put forth this theory, but his book turns an economic theory into a fascinating history of the catastrophic, far-reaching and unexpected consequences of infectious diseases on human affairs.