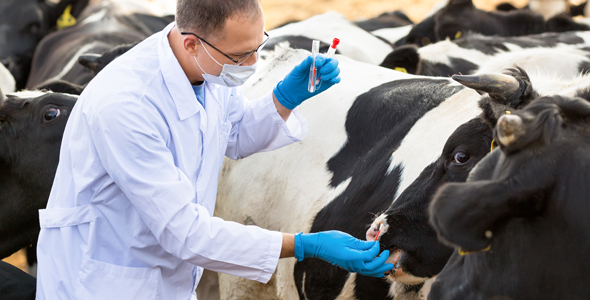 The World Health Organization (WHO) has declared that antimicrobial resistance (AMR) is one of the top ten global public health threats facing humanity. According to the Centers for Disease Control and Prevention (CDC), more than 2.8 million antimicrobial-resistant infections occur in the U.S. each year, and more than 35,000 people die as a result.

Antimicrobials are powerful medicines that fight infections in humans and animals. However, the efficacy of many of these important drugs is threatened when microbes develop the ability to defeat them, and some can also transfer their resistance genes directly to other microbes. The development of antimicrobial resistance is a natural evolutionary process, but there are situations that can exacerbate its spread. The main drivers of AMR include the misuse and overuse of antimicrobials, so it is critical that antibiotics and other antimicrobials are regulated, used judiciously, and administered by certified professionals.

Antibiotic Use in Agriculture

In recent years, the agricultural industry has been the focus of regulatory agencies. Antibiotics have been used on food producing animals for a variety of reasons, including growth promotion, feed efficiency, and the treatment and prevention of diseases. One of the most explicit misuses of antibiotics arises in situations where food producing animals are kept in unsanitary conditions with harmful bacteria and are administered antibiotics to prevent infections. However, misuse or overuse can occur for other reasons as well.

A study published in November 2020 showed that beef cattle on 22 feed yards in the U.S. were treated with macrolide antibiotics for an average of 135 consecutive days. This type of antibiotic is commonly used to treat liver abscesses, which are associated with diets designed to promote animal growth. One of the difficulties with treating cattle for liver abscess is that the animals seldom exhibit clinical signs of disease. For that reason, it can be challenging for veterinarians to determine when to terminate antibiotic treatment. Consequently, the animals may be given antibiotic treatments without a defined duration period.

Regulatory agencies, including the CDC, U.S. Food and Drug Administration (FDA) and U.S. Department of Agriculture (USDA), recognize the threat that AMR poses to human health. These agencies play a vital role in establishing and enforcing guidelines and laws for the administration of antimicrobials for both animals and people.

Reducing the use of antimicrobials in the agricultural industry is not an easy proposition, given the challenges that come with mass production. Enacting fundamental change has been, and continues to be, an arduous process. However, incremental change continues to show promising results and hope for the future.

One major step forward came in 2015, when the FDA announced the Veterinary Feed Directive (VFD) final rule. One of its major provisions recommends bringing the use of antibiotics in livestock under the supervision of licensed veterinarians. This is a critically important part of the agency’s overall strategy to ensure medically important antimicrobials in food-producing animals are used judiciously.

Two years later, in 2017, the FDA implemented Guidance for Industry #213. This guidance requires antimicrobials with importance in human medicine to be used under veterinary oversight when added to the feed or drinking water of food-producing animals. The guidance also disallows the addition of antibiotics to feed for the purposes of growth promotion or feed efficiency. In June of 2021, the FDA announced GFI #263, which is an extension of GFI #213. This guidance outlines the process for animal drug sponsors to voluntarily change the approved marketing status of certain medically important antimicrobial drugs from over-the-counter to prescription. Once this change is made, these important drugs can only be used in animals under the supervision of a licensed veterinarian.

Regulation and industry compliance have helped reduce antibiotics sold for use in food-producing animals. According to CIDRAP, “The clearest impact is on sales of antibiotics used for growth promotion, which dropped from 5.7 million kilograms (kg) in 2016 to 0 kg in 2017. Over-the-counter sales declined dramatically as well, from 8 million kg in 2016 to 271,280 kg in 2017.” In addition, the FDA reports that domestic sales and distribution of medically important antibiotics for use in livestock decreased by 33% from 2016 through 2017, and by 43% since sales peaked in 2015.

Actions for Livestock and Poultry Producers

The CDC outlines actions that livestock and poultry producers can take to help protect people and animals from AMR. First, by working closely with veterinarians, producers can determine the best ways to treat, control, and prevent disease in animals. Second, keeping animals healthy should be a priority. Adhering to established husbandry practices and animal welfare standards can create an environment conducive to disease prevention. Third, by using antibiotics exactly as prescribed, producers can ensure that vital treatments are not misused. And fourth, producers can protect their farm workers against bacteria and other microbials by maintaining a safe and sanitary workplace.

Agribusiness and Regulatory Agencies Can Help Fight AMR Together

AMR is a threat to everyone, and it is important to understand the urgency of reducing its spread. Previous CDC Director Robert Redfield states, “Stop referring to a coming post-antibiotic era—it’s already here. You and I are living in a time when some miracle drugs no longer perform miracles and families are being ripped apart by a microscopic enemy. The time for action is now and we can be part of the solution.” Regulatory agencies and agribusinesses’ actions are key. By continuing to develop and adhere to industry guidelines and best practices, we can help reduce the spread of AMR together.