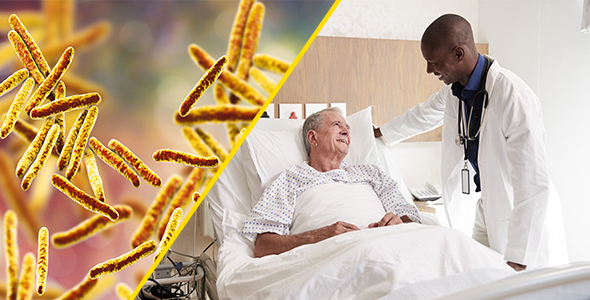 The World Health Organization (WHO) estimates that Tuberculosis (TB) caused 1.5 million deaths in 2018. It’s one of the top ten causes of death worldwide and the leading cause of death from a single infectious agent. A recent model predicted that the United States’ goal to eliminate TB will not be met in the 21st century without an increased investment in the detection and treatment of latent TB infections. In 2018, 9,029 TB cases were reported in the U.S.—only a slight decrease from 2017. To make matters worse, drug-resistant TB is predicted to increase around the world. It’s complex, costly, and threatens our ability to treat and control the disease.

How do you get TB?

TB is spread through the air from one person to another. It often affects the lungs; however, it can also impact the brain, kidneys, or spine. TB bacteria are released into the air when a person with TB disease of the lungs or throat coughs, sneezes or speaks. The disease is treatable and curable, but can cause death without the proper treatment.

TB often affects adults in their most productive years. However, all age groups are at risk, and certain people are at a higher risk of developing TB disease than others. People living with compromised immune systems, malnutrition, or diabetes have a higher chance of falling ill from a TB infection. More than 95% of TB cases and deaths are in developing countries.

What is Multi-drug Resistant TB?

One of the major reasons TB cases remain so high is because the bacteria continue to evolve, gaining resistance to our first-line drugs. Patients who are infected with strains of TB that are resistant to the antibiotics isoniazid or rifampicin are practically incurable by first line treatment. Treating multi-drug resistant TB (MDR-TB) is costly and difficult. Second-line options are limited and require extensive chemotherapy. Treating a single case of MDR-TB in 2018 in the U.S. cost $175,000.

The continued spread of drug-resistant TB is one of the most urgent and difficult challenges facing global TB control. A 2017 study predicted that drug-resistant TB will only continue to rise in the coming years, particularly in high-burdened counties such as India, Russia, and South Africa. According to WHO, in 2018, the 30 high TB burden countries accounted for 87% of new TB cases.

Improved surveillance as well as better diagnostics and treatment can make a difference.  An estimated 58 million lives were saved through TB diagnosis and treatment between 2000 and 2018. In 2016, the WHO approved a shorter, standardized regimen for the treatment of MDR-TB for those who do not have resistance to second-line TB medicines. This regimen only takes 9-12 months, compared to 2 years for conventional treatment and is less costly. The WHO also approved a rapid diagnostic test so that patients can be quickly identified and treated by the less expensive, shorter regimen. Worldwide, just over half of MDR-TB infections are successfully treated. Progress had been made, but as a global community, we have a long way to go. The WHO’s End TB Strategy aims to end the global TB epidemic, with targets to reduce TB deaths by 95% and to cut new cases by 90% between 2015 and 2035.

Today is World TB Day. It observes the date in 1882 when Dr. Robert Koch announced his discovery of Mycobacterium tuberculosis, the bacterium that causes TB. The purpose of the event is to raise awareness about the challenges that surround the elimination of the disease and to share how far we’ve come in fighting it as a global community. Too many people in the U.S. and around the world still suffer from TB. This year’s theme is “It’s Time”—it’s time to end TB.