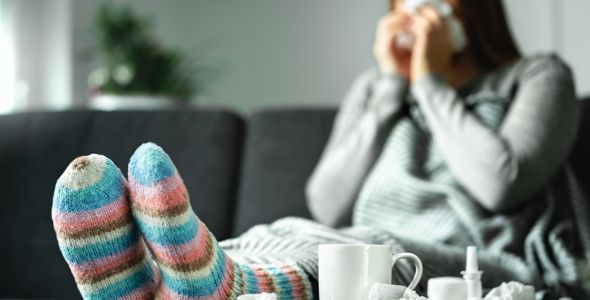 It’s that time of year—the leaves are beginning to change colors, the afternoon sun takes on an amber glow, and a hint of frost creeps into early mornings. The chill is a delight at first after intense summer heat. Then your seat companion on the commuter train hacks into their sleeve, muttering ‘sorry’ when you give them your best side-eye. Or, your colleague breaks the morning quiet in the office with loud, repeated coughing.  Or, you pick up your child from school in the afternoon only to find they are a sneezing mess. Or, you are the sick seat companion, the coughing colleague, the sneezing mess.

While many of us get sick during flu season, it is frequently avoidable. In fact, during the 2016-2017 flu season, flu vaccination prevented an estimated 5.3 million influenza illnesses, 2.6 million flu-associated medical visits and 85,000 flu-associated hospitalizations.

For the upcoming flu season, the CDC recommends annual flu vaccine for everyone six months and older, and it is highly recommended for those who are at a high risk of developing serious flu complications. Those who are 65 and older have the highest risk of developing complications from flu and account for the majority of flu hospitalizations and deaths each year in the U.S.

Although the seasonal flu vaccine does not protect against all strains of flu, it does protect against specific viruses that research indicates will be the most common throughout the season. Additionally, flu vaccination reduces the risk of flu-associated hospitalization among adults by 40%, according to the Centers for Disease Control and Prevention (CDC), and it has been shown to reduce the severity of illness in those who still get sick.

Over 100 national flu centers and over 100 countries conduct year-round surveillance for flu. These laboratories send samples of viruses, from patients with flu, to five different World Health Organization Collaboration Centers for Reference and Research on Influenza around the globe.

The CDC recommends getting vaccinated early in the fall, by the end of October, although it’s never too late. Getting vaccinated in January or later can still be beneficial. Many different kinds of flu vaccines are available too, including a type in the form of a nasal spray, as well as specific kinds for those over the age of 65.

Minimize your risk of being the sick seat companion, the coughing colleague, or the sneezing mess by taking simple precautions such as washing your hands regularly and avoiding contact with those who are sick. And go get your flu shot.