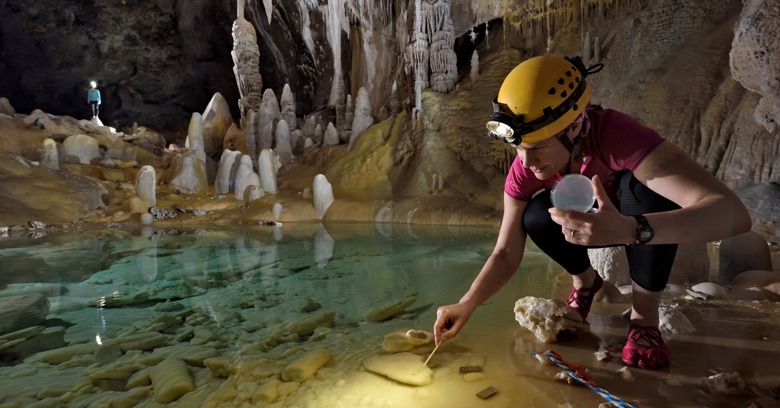 On August 1, 2006, Hazel A. Barton, PhD, published, “Introduction to cave microbiology: A review for the non-specialist” in the Journal of Cave and Karst Studies. This is one of many publications, presentations and television appearances spearheaded by Barton to bring to life the fascinating sciences of microbiology and speleology, which is the study of caves, crevasses, sinkholes, karsts and other natural subterranean habitats.

Known as the “Lara Croft of Microbiology,” Dr. Barton is an English born microbiologist and swashbuckling cave explorer in search of undiscovered extremophile microorganisms. She is a professor at University of Akron where she serves as Professor and Director of the Integrated Bioscience Program and Director of the Barton Lab Cave Research Group.

Dr. Barton’s research focuses on understanding how cave environments affect the ways that microbes evolve and adapt.  Her lab has studied underlying sources of antibiotic resistance, which include naturally occurring mutations and environmental selection.  The research she and her team completed has been “transformative, significantly expanding the established age of the evolution of antibiotic resistance from thousands to millions of years…[and] identified mechanisms of resistance that have not been seen in the medical setting and may take decades to emerge. By identifying these resistance determinants now, we have time to find ways of combating this resistance before it emerges in the clinic.”

In addition to her infectious enthusiasm for otherworldly microorganisms found at the openings of deep-sea hydrothermal vents or at the bottom of lightless Antarctic crevasses, Dr. Barton has worked diligently to mentor young students and to share her enthusiasm for caves and the microorganisms that live there.

She has appeared in numerous documentaries, broadcast news spots and presentations targeted to the general audience. According to her biography page at the University of Akron’s Cave Science: The Barton Lab Cave Research Group website: “Her research has been featured in Sports Illustrated, Forbes, National Geographic Explorer, Outside, Science News, The Scientist, Popular Mechanics, Wired, Geo and The Smithsonian magazines, in the book Extreme Scientists: Exploring Natures Mysteries from Perilous Places, on NPR and BBC Radio, on Animal Planet, the History Channel, National Geographic, the CBS Early Show, BBC TV and in the IMAX movie Journey into Amazing Caves. Dr. Barton is also an avid caver, having explored caves on six continents, is a director of the National Cave and Karst Research Institute and past-director of the National Speleological Society (NSS), and an award-winning cave cartographer.”

Dr. Barton also chairs of the Committee on the Status of Women in Microbiology and is a steadfast supporter of women in science, and has mentored dozens of students from middle school through graduate school. She also is a mentor to more than 50 high school girls and young women in her own research lab.

Dr. Barton is the 2019 recipient of the Alice C. Evans Award from the American Society for Microbiology (ASM). This award recognizes outstanding contributions toward the full participation and advancement of women in the microbial sciences. This award is given in memory of Alice C. Evans, the first woman to serve as ASM president (elected in 1928).