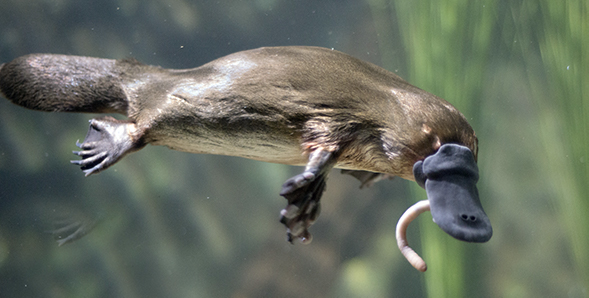 In 2010, scientists at Australia’s national science agency, the Commonwealth Scientific and Industrial Research Organization (CSIRO), discovered that platypus milk had antimicrobial properties. Now, after 8 years of study, they think they know why.

“Platypus are such weird animals that it would make sense for them to have weird biochemistry,” said CSIRO scientist Dr. Janet Newman, the lead author of the latest research titled, “Structural characterization of a novel monotreme-specific protein with antimicrobial activity from the milk of the platypus,” published in the journal, Structural Biology Communications.

“Monotreme [the biological order classification to which the Platypus belongs] lactation protein (MLP) is a recently identified protein with antimicrobial activity. It is present in the milk of monotremes and is unique to this lineage,” according to Newman et al.

Much of the paper describes the details of the isolation of MLP and the crystallization trials used to determine its structure, which, like the platypus itself, is very weird:

“The crystal structure of MLP reveals no three-dimensional similarity to any known structures and reveals a heretofore unseen fold, supporting the idea that monotremes may be a rich source for the identification of novel proteins,” said the research team in their paper. “It is hypothesized that MLP in monotreme milk has evolved to specifically support the unusual lactation strategy of this lineage and may have played a central role in the evolution of these mammals.”

While the platypus is a mammal and appears to nurse its young, the platypus does not have teats to express milk for their young. Rather, they express milk through pores. The milk pools in “groves” on the mother’s stomach and the newborn platypus laps up the pooled milk.

Newman’s hypothesis is based on the assertion that nursing without teats is not optimally hygienic. By allowing milk to pool outside the mother’s body before the platypus babies drink it, the milk is exposed to microbial pathogens that could harm the newborns.

The CSIRO team speculates that the platypus evolved the ability to make anti-bacterial milk to overcome the inherent weakness in the animal’s process of lactation. The bacteria-killing protein in this milk is MLP, which Newman describes as a highly unusual ringlet-like formation with a 3-dimensional shape that is unlike any mammalian protein seen before.

“Although we’ve identified this highly unusual protein as only existing in Monotremes, this discovery increases our knowledge of protein structures in general, and will go on to inform other drug discovery work done at the Centre,” Newman said in a CSIRO press release.

While doctors won’t be prescribing a platypus milk-derived antibiotic in the immediate future, Newman and her team genetically engineered a recombinant MLP so that they could test the protein’s antimicrobial potency. Concentrations of rMLP (recombinant MLP) at 50 µg ml−1 was “effective at inhibiting the growth of two susceptible bacterial strains of S. aureus and E. faecalis,” the researchers concluded.