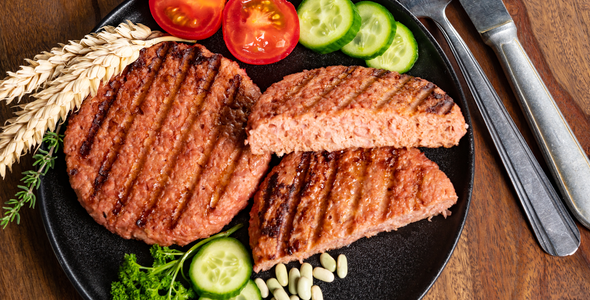 Meat is an important source of nutrition for the roughly 330 million people living in the United States. In 2017, the U.S. meat industry produced 52 billion pounds of meat and poultry. However, there is a growing number of people adopting dietary alternatives to traditional animal proteins, citing public health, environmental impact, and animal welfare concerns. These alternatives come in the form of plant- and cell-based meat (PBM and CBM) products. As these products become more commonly accepted, it is important to ensure that they are held to the same microbiological standards as animal-based meat (ABM) products and to protect consumers.

PBM products usually look like traditional ABM products, but are most commonly made from soy, peas, beans, mushrooms, mung beans, or wheat gluten. PBM products are becoming increasingly popular and have reached such a level of commercialization that they are being offered at traditional fast-food chains. Retail sales of PBM products in the United States grew by 10% in 2019, while retail sales of animal meat only grew by 2%.

CBM, or cultured meat, is produced using in vitro cultures of animal cells. CBM has not been mass commercialized in the United States like PBM, but it is moving from development into small-scale production. In just five years, the CBM industry has evolved from a handful of startups to around 80 startups. Other countries, like Singapore, have had success with getting regulatory approval from the government. In 2020, the Singapore Food Agency approved Eat Just’s cell-cultured chicken, making the country the first in the world to sell cultured meat to consumers.

As the popularity of PBM increases and CBM products continue to evolve, the need for adapted food safety and quality testing will increase.  PBM products have different levels and forms of macronutrients than their animal counterparts, which can influence spoilage rates. Additionally, the variety of ingredients in PBM products, such as yeast extract and spices, can result in different microbial loads. Each ingredient should be considered during the PBM formulation process to reduce the risk of contamination and spoilage. After formulation, comprehensive tests should be conducted on product samples to ensure consumer safety.

The inherent formulation and manufacturing complexities associated with CBMs also create food safety and quality testing challenges. Two major concerns for CBMs are the use of growth hormones and antibiotics in the manufacturing process. Before becoming commercially available, similar standards for production, processing, and testing of ABM should be applied to CBM. Processes for accurate and efficient safety and quality testing for both PBM and CBM are essential as these products become more commercially available and demand increases.