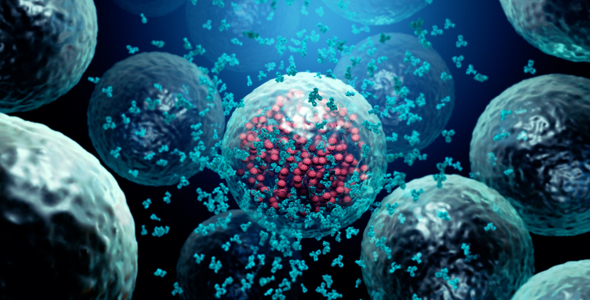 This is part 2 of a 3-part series about understanding viruses and how our immune system fights them so that we can develop diagnostics, treatments, and vaccines.

Read part 1: What are Viruses and How Do They Infect Us?

The immune system seems simple in the way we experience it—we get a mild illness and experience symptoms like sneezing and a sore throat for several days before it clears up and we feel better. We often take medicines to alleviate the symptoms, and sometimes we need medical intervention, such as an antiviral or an antibiotic. Our immune system is just part of daily life, and most of the time, we don’t even notice it working. The real story underlying our experiences, however, is extremely complex, and researchers are continuing to study and expand our knowledge of the immune system.

When pathogens get past those preliminary defenses, your body mounts an immune response. Your innate immune system responds first and employs several types of cells and molecules to fight off pathogens, each with their own jobs. One of those jobs is to neutralize or kill invading pathogens.  Another is to communicate with the adaptive immune system so that it can respond to the threat.

The adaptive immune system has two types of cells: B cells and T cells. B cells are special because they can recognize nearly any type of pathogen and make antibodies that help fight infections in a variety of ways. B cells also show T cells how to recognize the surface protein fragments of infected cells. T cells can then either kill the infected cell or help other immune cells.

Additionally, certain B cells and T cells have “memory” that allows the adaptive immune system to respond and make antibodies faster if you encounter the same or very similar pathogens in the future.  Immune system memory is not always permanent, and sometimes only lasts for a few weeks.  There are even some pathogens, such as measles, that can effectively “erase” your immune system’s memory, leaving you much more vulnerable to infections in the future.

What does “Immunity” Mean, and What Does That Have to Do with Antibodies?

When people say they are “immune” to an infection, they are often referring to having antibodies against a pathogen. However, as we’ve established, immunity is more than just antibodies and actually comprises all of your immune responses.  Additionally, antibodies themselves are complex, with varying structures and jobs.

Antibodies are classified into five different types according to their structures: IgG, IgM, IgA, IgD, and IgE. “Ig” is short for “immunoglobulin,” the scientific term for antibodies. Each type of antibody is made up of two main sections—the constant region, and the variable region. The constant region stays the same within each type of antibody, while the variable region is what changes (varies) to make antibodies specific to a given pathogen.

Antibodies are important not just for destroying pathogens, but for integrating all the parts of the immune system.  Immunity to infections occurs when each part of your body’s immune system responds effectively to a pathogen and then retains the memory to fight off that infection again in the future.

2 Replies to “How Our Immune System Works to Fight Viruses”