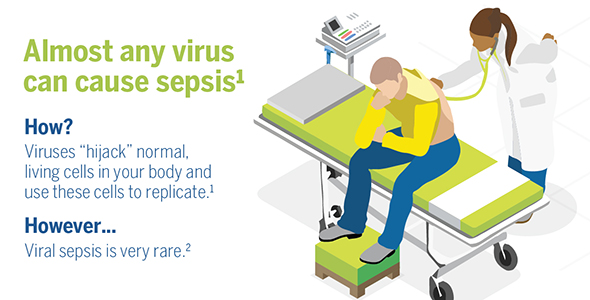 Sepsis is a life-threatening condition that can result from an infection anywhere in the body. Severe cases of sepsis often come from infections that are body-wide and spread through the bloodstream. Of the more than one million American’s who develop sepsis each year, 15-30% of those people die.

Viral sepsis may be under-diagnosed if tests for viruses are not performed, and up to 42% of sepsis cases are culture-negative, suggesting a non-bacterial cause. According to the authors of the study, Epidemiology and Immune Pathogenesis of Viral Sepsis, published in the journal, Frontiers in Immunology, “The initial standard of care for all cases of sepsis, even those that are subsequently proven to be culture negative, is the immediate use of broad-spectrum antibiotics. In the absence of definite diagnostic criteria for viral sepsis, or at least to exclude bacterial sepsis, this inevitably leads to unnecessary antimicrobial use, with associated consequences for antimicrobial resistance, effects on the host microbiome and excess healthcare costs.”

Viruses live in and infect their host cells, using their host cells to replicate and multiply, eventually destroying them. Because they are so different from bacteria, which are single celled microorganisms, viruses cannot be treated with antibiotics. While the symptoms of viral infections can be managed, viruses themselves are not easy to treat.

The authors of the Frontiers study used a predefined set of laboratory tests, which showed that up to 33% of the documented sepsis cases could potentially be attributed to viral infections. Predefined laboratory tests included PCR tests for multiple viruses. The most common viral infections found in that study were dengue viruses, rhinovirus, and influenza viruses. The level of contribution the detected viruses played in each case of sepsis, however, was unknown. Identified viruses could be the sole cause, a contributor to bacterial sepsis, or prolonged viral shedding of a previous infection. However, all viruses needed to be tested for in order to be identified.

Those who are most susceptible to viral sepsis are newborns and young children, older adults, and immunosuppressed individuals. Herpes simplex virus is a leading cause of neonatal sepsis, and human parechoviruses are frequently associated with sepsis in pediatric patients. People older than age 65 account for 60% of the mortality from seasonal influenza.  The World Heath Organization lists sepsis as a global health priority. Overall, the number of sepsis cases and their severity are growing; however, mortality associated with sepsis is declining. To understand the full burden of sepsis, more specific knowledge may be needed about the epidemiology of viral sepsis.

One Reply to “Viral Sepsis: How Much Do We Know?”