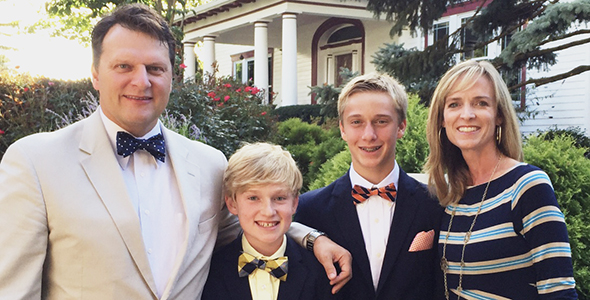 About five years ago, Angie Myers had to have half of her thyroid removed—it was the first time in her life she had undergone surgery. Just a week after the operation, she developed a severe fever that was accompanied by confusion.

A few days before her illness escalated, Myers noticed she was feeling a little feverish.

“I’d kind of been pushing myself since the surgery and so I didn’t really think anything of it,” said Myers.

The following day, Myers woke up with chills. She called her doctor, who said he wanted to see her first thing the next morning.

At the doctor, Myers confirmed her incision was healing properly, there was no drainage, no redness, and no swelling. Other than her fever, Myers was showing no symptoms of infection. Even though her physician started her on broad-spectrum antibiotics, over the next few hours, Myers’ illness escalated dramatically.

“I went home that afternoon and I was really feeling bad,” said Myers. “I don’t really remember this, but a friend of mine called, apparently. I had my cell phone and I was gibberish on the phone.”

The friend called Angie’s husband, who was out mowing the lawn at the time. She told him to come in and check on Angie.

“He came in, and I had really gone downhill,” said Myers.

Myers’ husband called the doctor. The doctor told her husband to immediately take Angie to the emergency room, where she was admitted. The doctor met the couple at the hospital, and the medical team started an IV and did blood work.

Myers had a high white blood cell count and a high heart rate. Her blood pressure was low, and her healthcare team agreed that it looked like she was starting to approach septic shock. Myers’ team ordered an MRI, which indicated she had an infected blood clot in her jugular vein. She was immediately started on an IV of vancomycin and another broad-spectrum antibiotic.

“I know my doctor, he’s a friend of mine actually, and he does not get his feathers ruffled,” said Myers. “I could see by the look on his face, that it was serious.”

Myers currently works on the lab optimization team at bioMérieux. She’s a microbiologist, but she explained that at the time, she really wasn’t thinking she had sepsis.

“I was shocked that I didn’t even think of it,” said Myers. “I knew how quickly things can go from bad to worse, and if I wasn’t on appropriate therapy, how I could go into septic shock, organ failure, and die, quite frankly.”

In the United States, sepsis causes death in 15-30% of patients who are diagnosed with the condition.

“After I had stabilized, my physician did say to my husband and I, ‘You know, I wasn’t sure at the time we were going to be able to bring her out of this.’ That was when I was when I thought, whoa, I’m lucky I’m alive,” said Myers.

Myers eventually stabilized and was sent home with a PICC line to finish her recovery. (A PICC line is a peripherally inserted central catheter, used when intravenous (IV) treatment is required for an extended amount of time.) She needed to be infused with antibiotics at home, three times a day for the next week. Myers had the PICC line in for six days and said that she really started feeling like herself again once it was removed. Even though Myers recovered, her hospital stay was difficult, not only for her, but her family too.

Once she was back home, Myers’ husband said, “I was making the bed before I was getting ready to come to the hospital to check on you, and I thought, I might be doing this by myself for the rest of my life.”

“I hadn’t realized that, and then thinking of my boys growing up without their mother, that just really hit me,” said Myers.

“They knew I was sick, but they didn’t realize how just how bad it was,” said Myers. “They do now though. We talk about it occasionally, and they know that I’m very blessed to still be here.”

Myers said that her illness was a classic story of, “You never think it can happen to you.”

As a part of Myers’ job at bioMérieux, she works with labs to improve their blood culture turn-around time and get actionable results to physicians faster. She explained how it can be easy to get caught up in the work and forget that there is a patient at the other end of the result.

“Time is of the essence and minutes matter,” said Myers. “That’s one of my phrases I use when I’m working with these labs every week, minutes do matter.”

Myers emphasized that it’s especially true when it comes to sepsis. Part of the reason she became so ill so suddenly was because she was not on the right antibiotic initially. Efficient diagnostics allow healthcare providers to choose the correct treatment, as quickly as possible.

“Being able to help labs know that minutes matter and to be able to contribute to patients themselves—I love my job,” said Myers. “I do really feel like I make a difference.”