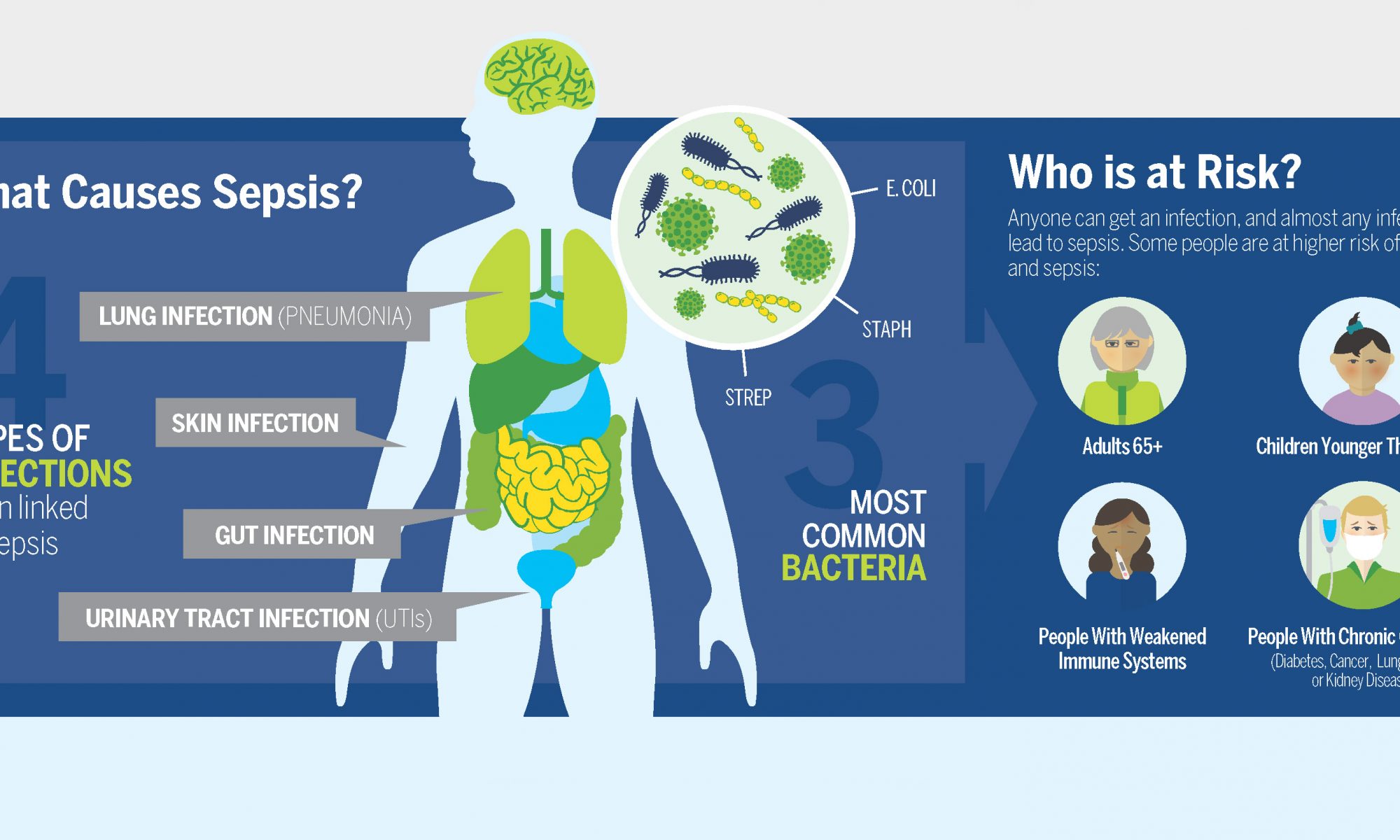 The infographic below, compiled from information from the CDC, provides facts and figures about sepsis in the United States, as well as causes, risk factors, and symptoms of sepsis. There are four types of infections that are most often linked to sepsis: lung infections (pneumonia), skin infections, gut infections, and urinary tract infections (UTIs). Different bacteria can cause those infections, but the most common bacteria associated with sepsis are E. coli, Staph (Staphylococci), and Strep (Streptococci).

Who is at Risk of Getting Sepsis, and What Are the Symptoms?

Anyone can get an infection, and almost any infection can lead to sepsis. But, there are some people who may be more likely to get sepsis, mainly because they are at a higher risk for infections. People more at risk for sepsis are adults over age 65, children younger than 1 year, people with weakened immune systems, and people with chronic conditions (like diabetes, cancer, lung disease, or kidney disease, for example).

Sepsis has six main symptoms, including confusion or disorientation, shortness of breath, high heart rate, fever or shivering, pain or discomfort, and clammy or sweaty skin.

How is Sepsis Diagnosed and Treated?

Sepsis can be very difficult to diagnose because its symptoms closely resemble symptoms of other illnesses, such as the flu. A diagnosis is made based on clinical judgement, but there are diagnostic tools available that can help doctors determine the likelihood of sepsis. Because sepsis is life-threatening, it is extremely important to make an accurate diagnosis as quickly as possible.

Right now, the only way to beat sepsis is to target the cause of the infection. So, besides determining whether a patient has sepsis, a doctor also needs to figure out what type of germ is causing the infection and prescribe appropriate therapy. Diagnostic tools can help with that as well, by quickly identifying infection-causing germs and which medications will work to fight them.

What Should You Do if You Suspect Sepsis?

According to the CDC, you should seek medical care immediately if you suspect sepsis or have an infection that isn’t getting better or is getting worse.

3 Replies to “Quick Facts About Sepsis”

Each year, healthcare organizations, schools, governments, companies, and communities around...